For ten millennia preceding the Industrial Revolution the Earth has had a healthy carbon balance. Forests, soil and other vegetation roughly balanced the amount of carbon dioxide (CO2) entering the atmosphere. The ocean also was an effective carbon sink with an appropriate mean temperature that allowed for CO2 absorption to balance naturally produced CO2.

But that changed starting in the mid-19th century as humans began to burn fossil fuels. The natural balance was no longer maintainable and the rise in CO2, at first gradual, has accelerated. In the last five decades as Developed and Developing Nations have increased energy demands the hockey-stick spike in CO2 has become significant.

The consequences of an annual increase in CO2 of 0.5 to 1.5 parts per million (ppm) in the second half of the 20th century and ongoing into the 21st has pushed the number to over 400 ppm. What makes this so noticeable is how aberrant it is from atmospheric CO2 values that we can accurately measure from the last 800,000 years where levels fluctuated between 200 and 300 ppm throughout that extent of time.

Climate change, based on scientific models and studies in overwhelming numbers (see pie chart below) contend with 95% certainty that human activity is the leading cause for the observed CO2 spike. And in 2015 when the countries of the world got together in Paris at COP21 it was clear that governments were in agreement finally to address the problem. Gone was the procrastination of the previous two decades. Action was needed. 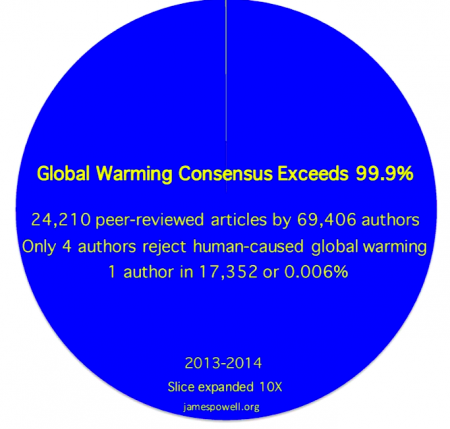 The Paris COP21 end result, 196 countries agreed to begin reducing carbon emissions with some pledging up to 30% cuts by 2030 and 50% emission cuts by mid-century. Their goal, to keep temperatures from rising 2 Celsius by century end and a pledge to strive and meet a threshold no higher than 1.5 Celsius. Rich countries agreed to provide an annual investment in carbon reduction programs of no less than $100 billion U.S. per year. Rich countries also agreed to take a leadership role in fighting climate change while developing countries pledged to enhance their efforts over time to make carbon cuts. All agreed that by 2050 the collective goal would be to produce rapid reductions achieving a balance between human emissions and carbon sinks both natural and human-engineered. As ambitious as these“non-binding” pledges were they run counter to what the scientists are saying needs to be done.

When we look at the past carbon balance both on land and the ocean we are dealing with non-human impacts on the absorptive capacity of these natural carbon sinks. Roughly in balance for 10,000 years with ocean temperatures and sea levels and forest mass remaining consistent, it seems intuitive that all we need to do is deal with the CO2 delta created through the burning of fossil fuels. But the reality is the forest mass is in decline around the world because humans are cutting down trees. And the other reality is the oceans are getting warmer and that means the capacity to absorb CO2 is declining as well. That means the natural carbon sink of the last 10,000 years no longer has the capacity it once had to keep CO2 in the atmosphere in check. A reduction of CO2 emissions by 50% by 2050, therefore, doesn’t stop the increase of the gas in the atmosphere. It will continue to rise. 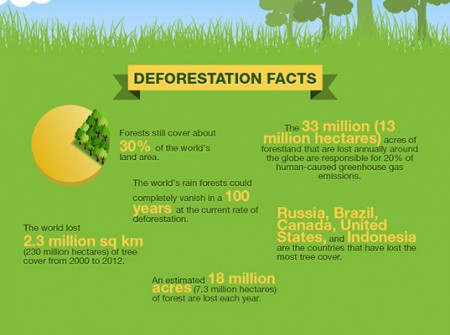 At COP21 196 nations of the world set targets to try and eliminate emissions to ensure that atmospheric mean temperatures not rise above 2 Celsius (3.6 Fahrenheit), and if possible keep the rise to no more than 1.5 Celsius (2.7 Fahrenheit). But a reduction of carbon emissions of 50% by 2050 doesn’t produce the intended temperature result.

In the last few weeks we have read headlines that indicate CO2 emissions have been flat for the last couple of years. When we see these reports we immediately think that the current efforts by our governments and industry are working. But the truth is the natural carbon cycle is not stable because human activity continues to reduce the land-based carbon sink through deforestation. And at the same time the rise in atmospheric temperatures is reducing the oceans natural effectiveness as a carbon sink. The atmosphere mixing with ocean surface water turns the latter into a net emitter of CO2 rather than a sink that sequesters the gas.

Climatologists today point to a total CO2 atmospheric carbon budget threshold that we cannot cross if we hope to keep the mean average temperature from rising above 2 Celsius. And that number is 2,900 Gigatons. In 2011 with an annual emission accumulation at 38 Gigatons per year we already reached 65% of the maximum. At that time we were within 1,000 Gigatons of atmospheric CO2 accumulation that would lead to the absolutely maximum warming considered “reasonable.” And if we can show that CO2 accumulations have been flat for the last few years then it means we are continuing to emit somewhere between 38 and 40 Gigatons of CO2 per year. So in 2016 we have come almost 200 Gigatons closer to the maximum limit.

So let’s look at those carbon reduction pledges that countries like the United States, China, the European Union, and Canada have made. The variables are reductions of between 25 and 50% in total annual emissions with targeted dates from 2030 to 2050. To meet these targets requires national programs with rapid improvements in energy efficiency, a quadrupling in low-carbon energy production along, and significant investments in carbon capture and sequestration (CCS). And with this kind of effort it might be possible with a 60% probability to keep mean global temperatures from rising no more than 2 Celsius. But to meet the 1.5 Celsius warming target requires a much larger reduction commitment to near zero by mid-century.

The truth is under present commitments there is a 12 to 14 Gigaton annual CO2 emissions gap based on national carbon reductions. That in itself is quite disturbing. 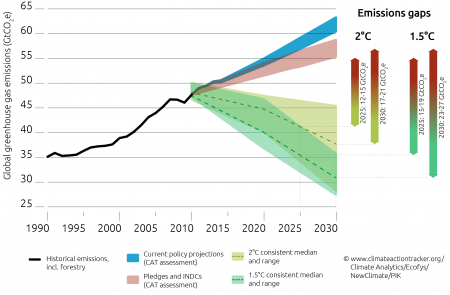 Now add the costs that must be incurred in terms of annual investments for countries to close that gap and meet agreed to COP21 temperature targets. A study from 2010 provided to the United Nations proposed annual investments from that date to 2029 as follows:

But it is no longer 2010 and the six year delay means these numbers are low balling the dollars needed just to begin to catch up.

COP21 becomes enforceable in 2018. Every five years thereafter humanity will measure results from initiatives taken by all signatories to the agreement. In 2025 all signatories are obliged to produce more ambitious carbon reduction strategies. In 2028 a second meeting will measure results and two years later even more ambitious reduction strategies will be tabled. Can we close the 12-14 Gigaton gap to ensure the intended 1.5 to 2 Celsius result? Coordinating a collective political will to achieve global results remains the biggest challenge. More than ever it will be important for climatologists and scientists in related fields to educate the public and governments about what needs to be done.