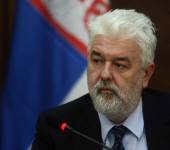 Serbia “has done a good and serious job in co-operating with The Hague tribunal and in meeting its obligations regarding the war crimes”, according EU Enlargement Commissioner Olli Rehn.

The European Commission (EC) last week gave a thumbs-up to Serbia’s implementation of European standards on the road to EU membership and called on the Union to implement its Interim Trade Agreement with Serbia.

Serbia signed the accord and the Stabilisation and Association Agreement with the EU in April 2008. Both agreements were suspended pending Serbia’s full co-operation with The Hague tribunal. Currently, the only EU member blocking the Interim Trade Agreement is the Netherlands, which demands that fugitive Ratko Mladic be apprehended and extradited.

EU Enlargement Commissioner Olli Rehn said Serbia “has done a good and serious job in co-operating with The Hague tribunal and in meeting its obligations regarding the war crimes”.

He added that Serbia “has demonstrated a will to come closer to the EU by implementing provisions of the interim agreement with the EU and by carrying out essential reforms”.

Serbian Prime Minister Mirko Cvetkovic called the EC report “good news” that would significantly shorten the EU candidate status for Serbia. According to Cvetkovic, the 2009 EC report is the most favourable one thus far.

Branko Ruzic of the Socialist Party of Serbia described the report as “a positive message and an encouragement for Serbia in the further process of the integration process, affirming the Serbian government’s commitment on the path to the EU”.