In a newly released paper appearing in Environmental Research Letters, researchers from The University of Queensland, University of Wollongong, University of the Sunshine Coast and CSIRO Oceans and Atmosphere in Australia, describe the disappearance of five of the Solomon Islands with six more suffering from dramatic land area reductions.

The Solomon Islands in the Pacific Ocean are home to more than 560,000. World War II buffs know these islands from the battle of Guadacanal, a turning point in the American advance against Japan. The islands are a combination of volcanic and reef construction with the latter lying a few meters above sea level. The researchers studied the coastal dynamics of 33 of these reef islands, a small number among the more than 1,000 islands that make up the chain. They did this by reviewing satellite imagery and by relying on local knowledge describing the changing coastline. Their conclusion, rising sea levels have been encroaching on the islands since first recorded observations back in the 1930s.

The majority of Solomon Island human settlements lie along the coastlines within the chain and over the past two decades there has been noticeable changes to sea levels. From 1950 to 1994 the rate of increase was 3 millimeters per year. Since then it has accelerated to 7 to 10 millimeters annually.

The researchers recorded “anecdotal accounts …. of extreme shoreline changes over the past decade…across all provinces of the Solomon Islands.” Their main focus looked at 32 reef islands forming barriers to two larger islands, Isabel and Roviana. These reef islands remain largely uninhabited but are used daily by islanders for fishing and other activities. Five of them on the northern coast of Isabel, however, have completely submerged. Six have declined in area by more than 20% between 1947 and 2014. For Roviana’s barrier islands results were mixed showing six losing surface area while the remaining six actually growing. The images below tell the story. 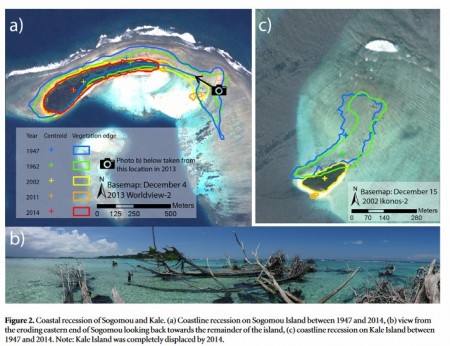 If you can’t read the caption below the image let me explain. The top left satellite image marked a) shows coastal recession on one of the barrier islands from 1947 to 2014. You can see just how much of the island has vanished over that time period. The picture in the bottom frame marked b) is a view of what that island still looked like  in 2014. There’s not much there. And the top right image marked c) shows significant reduction from 1947 to 2014 for a second island in the chain. These are just two examples from eleven islands studied in the northern Solomon Islands that have vanished or become severely eroded.

Ascribing what is happening to human influenced global warming alone may not be the entire picture.  The Solomon Islands are located at a geological convergence point among the Pacifc, Solomon Arc and Australian Plates. The result, a tectonic hot spot where earthquakes occur fairly frequently. For example in 2007 a megathrust earthquake on the Pacific Ocean floor caused Roviana to lose altitude. Isabel, however, lies in a more benign locale within the chain and has been minimally affected by recent earthquake activity.

The researchers have projected 21st century sea level rises between 20 and 100 centimeters by 2100 based on several climate study models. These projections do not account for the erosion activity brought on by waves and extreme weather events. When added to rising sea levels it is clear that the chain is under unprecedented threat with inundation severity and frequency reaching unacceptable levels already in several communities. One village has seen more than 50% of its houses disappear into the ocean. The capital of one of the islands has actually relocated all its citizens because of the threat of sea level rises. 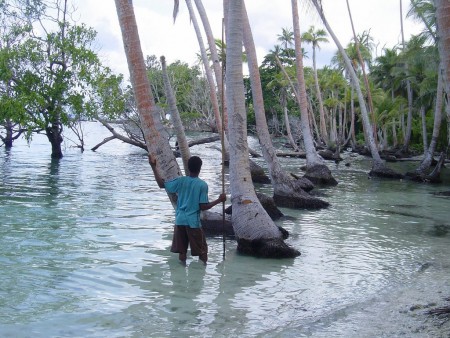 Back in 2013 The Solomon Islands joined other Pacific Ocean nations in signing The Majuro Declaration, a statement that recognized the unique vulnerability Pacific island states faced from anthropogenic climate change. It was a call for help sent out to the rest of the world. These nations led the call for a 1.5 Celsius limit on global warming at the recent COP21 meetings in Paris. That’s because projections at 2.0 Celsius would have unprecedented sea level impacts for these nations. But the conclusions of this latest study indicates that even with concerted effort by all nations to reduce carbon-based energy it will not stem the tide of accelerating sea level rises enough to save many of the islands, and the homes of those who inhabit them.