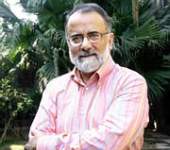 There was no warning of the bombings in London. The British intelligence service MI5 did not pick up any proverbial chatter, as usually talkative terrorists discuss the last details of their attacks over their mobile phones. Such was the confidence that al-Qaeda was not capable of launching a terrorist attack in Britain that MI5 lowered the threat-level rating a month ago, even though Britain was hosting the G8 leaders and massive Live 8 concerts over two weekends.

Then al-Qaeda struck. Two days later, according to US press reports, the security services hosted an unprecedented meeting of two dozen intelligence agency officials from the US and Europe, in which British officials admitted they had no leads on the bombings and asked for help.

The raids on Tuesday were a lucky break, obtained after viewing thousands of metres of closed-circuit TV pictures and receiving word that a young Pakistani was missing from his home in Leeds. Security officials were shocked to discover that at least one man, and possibly three others, had carried out a suicide bombing – the first of their kind in Europe. More surprises are sure to emerge.

Advertisement none of this should come as a surprise to anyone who has followed al-Qaeda over the past decade. Like retired generals who are always fighting the last war and can’t imagine the next one, the world’s intelligence agencies are constantly playing catch-up with al-Qaeda as it morphs into newer and more impenetrable structures.

Al-Qaeda’s tactical brilliance has been its ability to change its characteristics, recruitment patterns and mode of operations more swiftly than any terrorist group in history. On the battlefields of Afghanistan and Iraq, al-Qaeda militants and their allies have adapted to new American tactics by innovating their own. In the streets of Europe and Asia, terrorist cells have shown the same ingenuity.

The London bombers constitute the thinking and practice of a new al-Qaeda, as opposed to the al-Qaeda led by Osama bin Laden before September 11, 2001. The new al-Qaeda members have not trained in Afghanistan or Iraq and are unlikely to have traveled to the world’s hot spots. They have never met any of the old al-Qaeda leaders. Their cells are small and secretive. They do not use electronic communication and they carry British passports to be even more invisible.

Western intelligence agencies have been busy tracking down the old al-Qaeda. Since the events of September 11 more than 4000 terrorist suspects have been arrested around the world. The CIA claims it has captured 75 per cent of al-Qaeda’s leadership, but it does not know who has replaced those leaders or where they are.

In Britain, MI5 has monitored every group of politically active Muslims and has watched any activists arriving in the country. Meanwhile, MI6 has monitored British Muslims traveling to terrorist-prone countries, such as Pakistan or Iraq. Dozens of people have been arrested under Britain’s stiff anti-terrorism laws, while others are being held in foreign jails.

Unlike the old al-Qaeda, the new groups do not gather in London’s mosques on a Friday afternoon and attack the West for its policies, aware their speeches and conversations are being monitored.

While the old al-Qaeda militants involved their parents and girlfriends and told them when they were leaving for martyrdom (suicide operations), the new al-Qaeda terrorists will not divulge their activities to even their closest family members. At least one of those named as a suspect on Tuesday did not tell his family where he was and they phoned the police to say their son was missing. The new al-Qaeda is made up of individuals who have been friends for a long time, making any leak or penetration by intelligence agencies much more difficult.

Every successive bombing has improved the new al-Qaeda’s impenetrability. After the Madrid train bombings in March last year, which killed 191, police quickly picked up two dozen Moroccan suspects, while seven men blew themselves up before they could be captured. All the suspects had lived in Spain for years and had Spanish girlfriends and wives. Only two of them had been to Afghanistan before September 11; the rest had just heard the stories. They were caught because they overused their mobiles.

The London bombers will have avoided the same mistake and probably planned their attacks in face-to-face meetings, rather than over the phone.

The bombers blamed for 45 deaths in Casablanca in May 2003 came from slums in the city. Some had hung out in extremist mosques and were easily found by the security services. The Spanish Moroccans did not make that mistake. The bombers in Casablanca were unemployed; the bombers in Madrid were small-time businessmen. One of the London suspects helped out in his family’s fish-and-chip shop. Another suspect is a university graduate.

The new al-Qaeda militants have a desire to emulate the terrorist attacks of the old, making them copycat killers, rather than innovators, in that sense. But they are motivated by more recent perceived symbols of Muslim humiliation: the US occupation of Iraq and the jails of Guantanamo Bay and Abu Ghraib.

Organizationally, they are so different from the al-Qaeda that carried out the attack on the Twin Towers and fought the Americans in Afghanistan that they may not warrant being called al-Qaeda. Yet al-Qaeda, which means The Base, has always encouraged diffusion and innovation as long as the basis of its anti-Western ideology is not displaced.

Experts have grappled with the meaning of The Base since bin Laden adopted it in the early 1980s. Its meaning has constantly changed, from when it mobilized recruits to fight the war against the Soviet Union in the 1980s to when it fought Americans and the Saudi regime in the 1990s. In the post-September 11 era, The Base is simply an ideological direction. It offers little practical help to operations. About 30,000 militants trained in Afghanistan before September 11. They all knew each other and were in touch. The new al-Qaeda militants know only their own circle of terrorists.

The tactics of the new al-Qaeda were approved by the mentor. Bin Laden has never insisted on maintaining a centralised role for himself or his colleagues and has believed in constant change. In every speech since September 11, he has urged his followers to act independently.

The old al-Qaeda’s hero is Khalid Sheik Mohammed, who planned the New York attacks, recruited the personnel and arranged the logistics while traveling around the world with false passports and multiple disguises, and womanising at bars. He was arrested in Pakistan in 2003 while trying to rebuild the organization.

The new al-Qaeda hero is Ahmed Omar Sheik, the dour-faced but dedicated British Muslim, educated at the London School of Economics, who is facing a death sentence in a Karachi jail for murdering the American journalist Daniel Pearl in 2002. After September 11, Sheik traveled through Pakistan, Afghanistan and Kashmir, inspiring militants to set up independent groups, or to establish a group for one operation and then disperse, as he did when he kidnapped Pearl.

The new al-Qaeda members have moved away from training camps in mountains and deserts to the internet, where they can download terrorist manuals, recruit believers and communicate with a far wider public than bin Laden could.

Europe is now the centre for future al-Qaeda attacks. Countries with many, (often marginalised) Muslim migrants, the ease of travel and communication, and lax security in many countries offer a vast field of operations.

The London bombers will be an inspiration for others on the Continent. Their methods will be studied by students of terrorist bombing and their failures taken into account.

If closed-circuit TV was the weak link for the London bombers, expect the next group to avoid that. The new al-Qaeda is not about the past but the future and perfecting the untraceable terrorist attack.

Ahmed Rashid is a Pakistani journalist and best-selling author of several books about Afghanistan, Pakistan, and Central Asia.

Previous post Prerelease: Ahmed Rashid Takes On the Crisis in AfPak
Next post The Scary Unraveling of Pakistan