In the light of all the controversy over whether the Chinese economy was about to collapse or suffer such a ‘hard landing’ that it would spill over into causing a new global recession, the recent conference of the International Initiative for Promoting Political Economy (IIPPE) was very apposite.

In this year’s conference in Leeds, England, one of the themes was the nature of China, its economic development and its future.  China has been ignored in many heterodox or Marxist political economy academic conferences, so the flourishing of new papers by young scholars with first-hand experience of China is to be welcomed.  It was these papers that I concentrated on at the conference and left the usual (and yet endless) number of papers on ‘financialisation’ in post-war capitalist economies that still dominate such conferences.

Is China capitalist? What is the nature of China’s development?  Is it going to crash as in the West and if so why?  These are the questions that many of the papers in Leeds addressed.  I can only give readers a flavour of the discussions from the various abstracts, as well as describing in more detail my own paper on China presented there.

Robert Pauls, a young German scholar, presented a paper called,Capitalist Accumulation and a Conjunction of Two Crises in China, in which he argued that China had developed contradictions (disproportionality and overaccumulation) as well as a declining profit rate in just the same way as modern capitalist economies.  For him, Chinese capitalism showed the generic features of capitalism and was not ‘different’ in any substantial way.

In his paper, Rebalancing or unravelling? Contradictions in China’s system of accumulation, Steven Rolf looked at the political economy of Maoism and its transformation under Dengism, pinpointing its characteristics as: low wage, low skill production for export, and the formation of a migrant labour regime. He argued that the Dengist goals of higher productivity and consumption had not successfully ‘upgraded’ the economy, but rather deepened marketisation and financialisation.  China was not developing a high-productivity socialist economy, but a typical low-grade emerging capitalist economy.

In another session, Jo Michell disagreed with this line of argument in a paper called, Is China the next victim of ‘financialisation’.  Michell argued that, while true that the recent developments in China resembled destabilisation and disfunctionality phenomena of more financially advanced economies, it is premature to declare China the victim of financialisation.  In Rethinking neoliberal processes in China- is there the “China model”?, Jana Mudronova also reckoned that it was too simplistic to talk about a ‘China model’ of development as economic processes varied sharply between the more capitalistic Guangdong and more ‘statist’ Chongqing.

These more measured analyses contrasted with that of Sheng Wu in his paper, Improving the Economical Growth Model with Chinese Characteristics, which seemed to me nothing more an uncritical apologia for the position of the Chinese government and Communist leaders calling for “the necessity that China accelerate improvement of the Economical Growth Model with Chinese Characteristics. … We must unwaveringly adhere to the strategic thinking that only development counts.”

The idea that China is allowing local democracy was questioned by Alexandre Gomes in a paper entitled, China’s Developmental Path and Scales of Governance.  Gomes pointed out that the Chinese national state remains a dominant agent in decision-making, especially when it comes to industrial (technological) upgrading  The party and Beijing government remains in charge. Indeed, China’s development has remained based on a dominant state sector.  So even though foreign companies were invited into the Chinese economy from the 1990s, they were forced to play a subordinate role.  Thus argued Rubens Sawaya (China and its strategy of insertion in world capitalism).  As a result, virtually every major multi-national is tied to Chinese interests and territorially rooted in the country. This means that China is catching up quickly on average and high technology industries, a view contrasting with Rolf above.

As a result, China has been able to maintain its independence from US imperialism and global capitalism like no other.  Lorenzo Fusaro (Why China is Different: Hegemony, Revolutions and the Rise of Contender States) rejects the Panitch-Gindin view that China has fallen within the US hegemony. Instead, China has been able to gain relative geopolitical autonomy as a result of the revolutionary processes it went through and eventually assert itself as a ‘Contender State’ now in the process of challenging US hegemony. Adrian Budd (The geopolitical economy of China’s rise) took up the same question.

Does this overseas expansion mean that China is just another imperialist power like the US or Russia?  Sam-Kee Chang (China’s“Go Global” in the age of new imperialism) reckons not. China’s market reform has to be understood in the context of a non-capitalist state struggling to preserve its command economy under US imperialism. China’s economic expansion cannot be explained solely as capitalist accumulation.

Indeed, China has begun to build rival alliances to the ‘international community’ of major imperialist states. Rhys Jenkins (The Political Economy of China’s Economic Expansion in Sub-Saharan Africa) explained the rapid expansion of its involvement in Sub-Saharan Africa and Latin America over the past decade, while Ben Reid (China, Trade and Uneven Development in Southeast Asia) discussed the emergence of China as an economic and regional political power for neighbouring, semi-industrialised and developing economies in Southeast Asia.

This brings us to the question of whether China is a capitalist state or not?   I think the majority of Marxist political economists agree with mainstream economics in assuming or accepting that China is.  However, there are some who do not.  In an illuminating paper, Jonathan Clyne (Is China a developmental state?) argued that while China had many features of a ‘developmental state’ like Japan, Korea and Taiwan (i.e. an economy characterised by oligopolies pushed and enticed into developing the economy by the state), the mixture of state intervention and market in China was of a fundamentally different, and previously unseen, character.

Heiko Khoo was clear (Marxist Analysis of China’s Social System).  For him, China is not capitalist. Commodity production for profit, based on spontaneous market relations, governs capitalism. The rate of profit determines its investment cycles and generates periodic economic crises. In China, public ownership of the means of production and state planning remain dominant and the CPC’s power base is rooted in public ownership. The balance of class forces helps to explain this. The transition from capitalism to socialism means that public ownership replaces private ownership in the commanding heights. Profits and markets are replaced by economic planning. In the transitional era, planning battles against and coexists with markets. Public ownership of the commanding heights provides the foundation for planning but it is not socialism. China operates a system dominated by public ownership and state planning and it defies the laws governing capitalism.

My own view has been expressed in various posts on my blog.  I presented a paper that tried to delineate three different models of China’s economic development (China: three models of development).  In the past 30 years, China’s growth has been phenomenal.  And since the global financial crisis and the Great Recession in the major capitalist economies, China has continued to close the output gap with the leading capitalist economies.  What explains this Chinese economic miracle?  There are possible three economic models of explanation: the neoclassical ‘comparative advantage’ model; the Keynesian ‘heavy investment’ explanation; and the Marxist ‘law of value’ explanation.The argument of my paper was that neither the neoclassical nor the Keynesian model of development was accurate or most relevant to understanding China’s economic miracle.  The Marxist model of rising productivity through investment and innovation to replace labour and the accompanying contradiction with the dominant law of value in the world economy provides the best explanation of where China has come from and where it is going.  My paper is here CHINA PAPER July 2015.

As for the immediate picture, in this Long Depression, global growth has been low and slow. At first, China avoided this slowdown and the effects of the great recession in the major capitalist countries. That’s because its large state sector could be directed and funded to invest by the government, unlike in Europe or the US. But the trade impact of a slowing world eventually began to affect Chinese exports (which are dropping) and, as the government had allowed the expansion of capitalism into a stock market and real estate sector, it fomented a credit bubble that it is finding difficult to control. It’s the orientation towards the capitalist sector within China that is making it weaker. China can still avoid a hard landing if the state seizes proper control of productive investment and raises wages to expand consumption. But that would damage the capitalist sector of the economy and the Communist elite appears unsure of which way to go.

Previous post SOCIALISM vs. CAPITALISM: Past, Present and Future 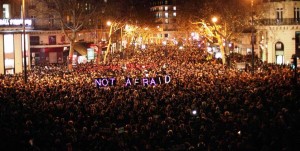