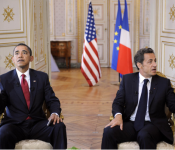 U.S. President Barack Obama is so beloved in Europe that he was nominated for a Nobel Peace Prize (which he later won) just 12 days after taking office for his “extraordinary efforts to strengthen international diplomacy and co-operation between peoples.” A Pew survey this summer found that 93 percent of Germans, 91 percent of French people, and 86 percent of Brits believed Obama “will do the right thing in world affairs,” a stunning turnaround from their views on the last administration. Yet, this perception belies the reality that Obama has done much less for Europe than his predecessor.

Despite George W. Bush’s defiant “you’re with us or you’re against us” public stance, he actively solicited advice and input from his NATO partners. Obama, by contrast, is saying all the right things in public about transatlantic relations and NATO but adopting a high-handed policy and paying little attention to Europe. And Europe is taking a hint.