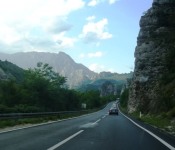 Amid squabbles over the issue, Montenegro and Kosovo are planning formal negotiations to establish a definitive, legally binding border. Officials have tried to stay positive, with Montenegrin Foreign Affairs Minister Milan Rocen insisting that his country “does not have any difficult issues which cannot be solved by talking to our neighbours”.

However, Rocen acknowledged he had not yet been fully briefed on the matter. “I don’t want to get into the context of it and I don’t have enough relevant information to comment on it in public,” he said.

At the same time, the Montenegrin interior ministry issued a toughly-worded statement, declaring that the country would not give up a single square metre of its territory.

Recent incidents have raised the level of concern. According to Kosovo media, signs reading “Welcome to Montenegro” were erected on the Kosovo side of the disputed Kulla/Kula border area, near Pec — a territory that includes 21 villages.

In protest, over 200 Albanian villagers blocked the main highway leading to the border crossing. Their representative, Sadri Zeka, claimed that nearly 1,000 hectares have been appropriated by Montenegro.

According to Kosovo’s Telegrafi news agency, the protest prompted a meeting between Kosovo’s regional and border police, as well as the Peja/Pec mayor and the Montenegro border police chief inspector.

Nusret Kalac, the mayor of Rozaje, a small Montenegrin border town adjacent to the disputed area, told TV Vijesti that his municipality has and will continue to maintain roads and provide security in the area.

“We have done this and we shall do this, and if someone is bothered by the border or not, if someone has [territorial] appetites, that is their business,” said Kalac.

Emilo Labudovic, an MP representing Montenegro’s Serbs, disagrees. Belgrade’s B92 quoted him as saying ethnic Albanians had crossed into his village, occupied pastures and cut down forests. “Montenegro’s border police are not reacting,” he claimed.

Kosovo officials seem to believe the border demarcation process will be relatively easy and will be shorter than the one recently concluded with Macedonia. Government spokesperson Memli Krasniqi was quoted in the daily Zeri on October 27th as saying that Kosovo and Montenegro do not have border disputes.

Interior Minister Zenun Pajaziti told the daily Bota Sot”it will be a process of joint management of this issue … and no concern is expected.”

Pajaziti could not say when exactly the border demarcation — and the initiation of formal diplomatic relations with Montenegro — may take place, but expressed hope it will happen soon.

Last month, Montenegrin Minister of Human and Minority Rights Ferhat Dinosa told local media that he expects diplomatic relations to be established by the end of the year.

Not everyone in Kosovo agrees. The leader of the Vetevendosja (Self-Determination) movement, Albin Kurti, has long warned that the two countries would have trouble demarcating the border. He suggests the answer can be found in a 35-year-old document: Yugoslavia’s 1974 constitution, in which Kosovo’s borders are defined.