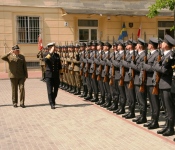 EU military chiefs are nervous that their advice will not carry the same weight once the new Lisbon Treaty is in place and that the planned diplomatic service will not contain enough experienced military personnel.

Europe’s chiefs of defence gathered in Brussels on Wednesday (4 November) to review all military operations under the EU flag and to witness the handover of power from outgoing EU military committee chair, Frenchman Henri Bentegeat, to Sweden’s Hakan Syren.

But the hotter topic – dealt with in “informal talks” – was the impact of the Lisbon Treaty on the current EU military set up, the two generals told journalists after the meeting.

Once in force on 1 December, the Lisbon Treaty will merge the current military planning unit with a civilian one and fold all operational and planning divisions into the diplomatic service, due to be fully up and running by 2012.

The military chiefs will no longer report to the rotating EU presidency, but directly to the new EU foreign minister, who will also be a vice-president of the European Commission.

The EU’s future top diplomat – British foreign secretary David Miliband is still favourite to get the job – will also have the power to propose missions abroad and to “ensure co-ordination of the civilian and military aspects” of these missions.

The military chiefs said they want to maintain the “high professionalism” and “rigour” of their structure, and to make sure their advice is still taken into account once they are part of the large new diplomatic service, known formally as the European External Action Service (EEAS).

“The chiefs of defence welcomed the recent agreement on the EU external action service (EEAS), comprising all crisis management bodies, including the military committee. In respect to the civil-military planning department, we want to ensure that attention is paid to the filling of military posts with experienced personnel,” Mr Bentegeat stressed during Wednesday’s press conference.

During his three-year mandate, EU ministers or heads of state never “transgressed” the advice formulated by his committee, Mr Bentegeat said. “Whatever we say is respected,” he explained.

Mr Bentegeat noted that the “very wide open EEAS” will include diplomats from member states and staff from the European Commission, as well as the current military planning and operational units – something viewed with wariness in some military circles.

The French five-star general traced the “real revolution” of EU’s new approach back to the difficulties faced by member states in Iraq and Afghanistan, which showed that a pure military solution is not enough.

Incoming chairman Syren echoed his remarks, saying that apart from pure “separation of belligerent parties”, European troops needed to be involved in civilian operations as well – such as the stabilisation phase in Bosnia, evacuation measures, and protection of humanitarian aid flow like for the naval operation off the coasts of Somalia.

Mr Syren also pointed to the need to “keep the level of professionalism” in the new EU security and defence architecture. The 57-year old Swede has been the chief of defence in his country for the past five years and had a year to prepare for this job, as he was elected by his fellow generals in 2008 to succeed Mr Bentegeat.

“It’s a fantastic timing to get the job now, when there is such a change in the organisation and attributions and new personnel appointed,” Mr Syren told this website.

“My job will be to guarantee the military and professional will and knowledge. The role of the committee is to be a good advisor on what can be done, on what the military reality is,” he said. There exists also “the political will we’ll have to obey,” he added.