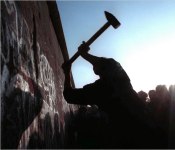 The demise of the Berlin Wall and all it stood for hold different memories for different people. Overt joy was the emotion felt by many in the West, seeing it as a symbol for the end of the tyranny of communist control. For others, there were mixed emotions. In the former Soviet Union, tearing down the Wall became a symbol for the beginning of the end of the Soviet state.

Euphoria among Some Germans

“It was the happiest moment in German history,” said Matthias Rueb, Washington bureau chief of the Frankfurter Allgemeine Zeitung. At the same time, however, he described his initial reaction to the events of 9 November 1989 when the Wall fell as overly optimistic. “But this optimism faded quite quickly, and I realized that it takes a generation to overcome not only this outer – but especially inner – division. There is still this wall in the head,die Mauer im Kopf – a lot of quarreling going on between East Germany and West Germany,” Rueb explained.


Whatever the difficulties of political transition in Central and Eastern Europe, 1989 can still be considered as the annus mirabilis, or year of miracles, argues Rueb. “It was a miracle that it happened suddenly and, with the exception of Romania, peacefully.” In that sense, the feeling that something miraculous was happening is not much different than it was 20 years ago, he said.

German Chancellor Angela Merkel, speaking before the U.S. Congress this week, thanked the American people for their support for German reunification. A former citizen of the German Democratic Republic in the East, Chancellor Merkel called on the United States to work with Germany to overcome what she called the “walls of the 21st century” – those areas that continue to divide people in the world, whether on climate change, cooperation in combating terrorism, economic matters, or politics.

“Liberation from communism was not regarded as an unambiguously good thing in Russia,” said Russian journalist Masha Lipman of the Carnegie Moscow Center. Communism’s demise in Central and Eastern Europe was followed in 1991 by the collapse of the Soviet Union. “The USSR, which used to be a superpower, lost its sphere of influence, lost part of its territory, and was dramatically weakened,” Lipman explained.

Berlin as a Model for Revolutions Elsewhere

“It may be that what happened in 1989 has established a new model of revolution,” said British historian Timothy Garton Ash, author of The Magic Lantern: The Revolution of’89 Witnessed in Warsaw, Budapest, Berlin, and Prague.

Ash argues this “new” model of revolution supplanted the French Revolution model, one that was violent, utopian, and class-based. “The 1989 model in contrast was non-violent, anti-utopian, not based on one class, but on attempting to build the broadest possible social coalition,” he told an audience a few weeks ago at the Brookings Institution in Washington. “The symbol of 1789 was the guillotine; the symbol of 1989 is a roundtable where you negotiate.”

“The international media often play a critical role these events today,” Ash said. Certainly, authoritarian regimes in Iran, Russia, Belarus, and China have identified “velvet revolutions” as a “Western subversive plot” and a threat to their power. “The West has not created these events, said Ash. “But in every case – as in Central and Eastern Europe 20 years ago – it is people on the ground who have made these things happen.”