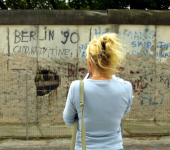 The fall of the Berlin Wall was bad news for sovietologists. Thousands of spies, military officers, diplomats, professors, journalists and assorted experts made a living studying the Soviet Union. None predicted its collapse.