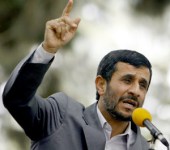 The political scene in Iran is always shifting, but an hour last night brought dramatic evidence of the trends, not only in Opposition v. Government but also within the shaky Ahmadinejad Administration.

The news emerged, first through Mir Hossein Mousavi’s websites, then through the Iranian press, that the “40th Day” memorial would proceed on Thursday at the Grand Mosala in Tehran. For the activists, this was not a case of defying the authorities; rather, they claimed that there had been no denial of permission. There was only a “low-level” Ministry of Interior official, making a personal statement, trying to stop the gathering.

As with the last high-profile organised rally, the march to Hashemi Rafsanjani’s Friday prayers, the challenge is very clever.

Any attempt by the Iranian Government to ban or disrupt the memorial will be upheld as a restriction on Shia Muslims carrying out religious duties in their remembrance of the dead. So what may happen is that Iranian security forces, “maintaining order”, do not confront those in the Mosala but try to prevent people getting there. That too has its risks: attention will then be given not only to the memorial (which is designed not only to be political but, on the surface, apolitical with readings from the Koran) but to a series of scattered confrontations around the city.

Those confrontations will produce video; it has been notable that on both 17 July, the day of Rafsanjani’s prayers, and 21 July, the last occasion of scattered rallies throughout the capital, far more footage has gotten out of Iran. And if those confrontations produced more arrests, the regime only magnifies the current problem it faces over the issue of detentions.

Since 20 June, when dozens died in demonstrations, there seems to be a pattern to keeping opposition not only alive but visible. Eight days later, there was the limited but still notable gathering of thousands at Qoba mosque. It was then 11 days to the 18 Tir rallies, and another eight days to the Friday prayer march. Tomorrow’s memorial comes nine days after the 21 July rallies. President Ahmadinejad thus may want to take note: his inauguration is a week from now, offering a logical occasion for another public show of opposition.

In the same hour last night, another series of revelations emerged about the battle within the Government. The clerical opposition grew throughout the day, with the Assembly of Experts now fragmented into a series of pro-Ahmadinejad and anti-Ahmadinejad (and pro- and anti-Rafsanjani) groups, but in the evening, it was the political criticism of the President that took over. While the majority of Parliament have come out strongly for the Supreme Leader, Ahmadinejad now faces the hostility of “Principlists” and even some “conservatives”.

That hostility has had an effect beyond the symbolic. Parliamentary pressure appears to have contributed to the Supreme Leader’s decision to close one prison and the Judiciary’s order to release 140 detainees. It will be interesting to see if that pressure continues — there are still hundreds, including prominent politicians, held and the question of an enquiry into the deaths of detainees (remembering that one victim was the son of a high-profile “conservative” activist) is unanswered so far.

Meanwhile, the Ahmadinejad Administration faces its own battles within. We’ll post later on an extraordinary story of the convulsions within the Ministry of Intelligence, which have led to the departure of several high-ranking officials, and tales of a political war between the Revolutionary Guard and those who do not want to blame the post-election conflict on a “velvet revolution”. The President’s declaration yesterday that he, rather than the Supreme Leader, will supervise the Ministry only adds to the intrigue.

Inside the Cabinet, the President is living with three Ministers who he tried to fire. The furour over the First Vice President has overshadowed any political and economic programme — Ahmadinejad’s televised attempt a few weeks ago to set out his policies (and thus his authority) seems very distant.

A week before he is supposed to be inaugurated, “President Ahmadinejad” seems to be little more than a label. Some are paying more attention to the Green Movement, some to the leadership of the Supreme Leader, some to Hashemi Rafsanjani, some even to the notion of a de facto assertion of power by the Revolutionary Guard.

Forty days after the death of the 20 June demonstrators, who will be remembered tomorrow, this is no longer a single “Green Wave”. Rather, there are waves crashing all round, outside and the Government. And, even if Ahmadinejad is swept away by the political undertow, there will be no return to still waters.