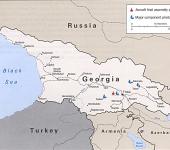 One year after Russia and Georgia fought a five-day war over the Georgian breakaway region of South Ossetia, much of the debate has focused on who was to blame. But regional analysts are asking other questions, too. Specifically, they are talking about what lessons can be learned from the conflict and how those lessons relate to today’s challenges.

Both Russia and Georgia blame each other for starting the conflict last August. Eurasian expert Paul Goble says both sides are culpable. “The Georgian government acted foolishly, but the Russian government acted criminally.”
Goble says Georgian President Mikheil Saakashvili’s decision to introduce Georgian troops into South Ossetia provided Russia with an opportunity to intervene. “When he did so, the Russian government of President Dmitri Medvedev used that as a casus belli to introduce Russian troops into Georgian territory in the name of supporting Russian peacekeepers,” said Goble. South Ossetia was recognized as part of Georgia under international law. Thus, Russia’s deployment of troops there, he said, constituted an act of war.
Despite the facts of the invasion, Goble says Russia’s propaganda machine has done an effective job of convincing many people in Europe and in the United States that President Saakashvili caused the war last August.
A Russian Perspective

As might be expected, Russian television has focused on Georgia as the aggressor in the conflict. But as Russian journalist Masha Lipman of the Carnegie Moscow Center notes, that is not what matters most.
“I don’t think it makes sense today to look at who was first to attack,” said Lipman.  “We still have this fog of war veiling what happened a year ago – details provided by both sides – that make it impossible to figure out exactly what happened.”  In the eyes of Russians, however, Lipman said, the defense of Russian citizens in South Ossetia and the safety of peacekeepers there made the Russian incursion an entirely legitimate military and diplomatic move.
A Georgian Perspective
In Georgia, what counts now is concentrating on Georgia’s current military, economic, and political challenges. That’s the view of Levan Tsutskiridze, president of the Association for International Relations in Tbilisi. “Today’s security situation is very unstable. Georgia’s capital sits within artillery range of Russian forces,” Tsutskiridze observes.

Like the rest of the world, Georgia’s economy needs to be recharged. Politically, it now appears the internal political struggle between President Saakashvili and the leaders of Georgia’s opposition has leveled off, and the months of protest in the heart of Tbilisi are over. Tsutskiridze suggests that President Saakashvili is poised to remain in power until the end of his term.
Lessons for the West
What lessons can Washington glean from reviewing what happened in Georgia last year? “The United States has to realize that it has to deliver its messages far more clearly and in a single voice than it has up until now,” said Paul Goble. “I do not believe Saakashvili would have done what he did, had he not thought – on the basis of comments by the former U.S. President and the former Secretary of State – that Washington would have no choice but to support him.”
Goble says, by not being more emphatic, Washington may have inadvertently encouraged the Georgian President to believe that NATO membership was a realistic goal and that the promise of eventual membership implied western protection. It didn’t. Russia was not going to allow NATO bases in another former Soviet republic on its border.

“The United States and the West Europeans have got to realize that the government in Moscow has not accepted the dissolution of the former Soviet Union in 1991 as the final settlement of the Cold War,” Goble cautions. He calls Russia a “revisionist power” that would like to rewrite history.  In that sense, he says, Moscow constitutes a threat around the whole periphery of the Russian Federation.
In fact, shortly after the war with Georgia, President Medvedev laid claim to what he called a “privileged sphere of influence” in the region. He said that sphere included not only the states adjacent to Russia’s border but also Russian citizens and commercial interests – wherever they might be. As if to underscore that position, this week Prime Minister Putin visited the breakaway Georgian region of Abkhazia, which Moscow also recognizes as an independent country, pledging to strengthen Russia’s military presence there.