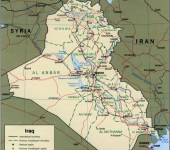 Iraq 2003 is becoming ancient history within the Anglo-Saxon political world, as all the commissions have reported, the questions have been answered (as far as we know), and attention shifts big time to Afghanistan.

In contrast the Iraq war continues to cause shock waves across European politics. Revelations over the previous two years over the support given to the invasion forces by agents of Germany’s intelligence service Bundesnachrichtendienst, delivered as the SPD government of Gerhard Schroder gathered much of its popular support based on opposition to the war,have caused upheavals.

This week the Dutch turned a corner of perhaps greater significance. For five years Premier Jan-Peter Balkenende has refused to allow any kind of investigation into the decisions and deals surrounding the Dutch ‘political, not military’ support for the 2003 invasion. Simmering discontent over this stubbornness, coupled with persistent suspicions that there was plenty to hide, kept the issue bubbling away within the worlds of investigative journalism and the political Left, who smelled a large, US-style rat.

Gradually, over the years, evidence has seeped out, a leak here, a secret statement there, which indicated that the Dutch involvement in the invasion had indeed stretched to military activity despite the denials of the premier. What is more, there were rumours of Washington delivering a ‘shopping list’ to The Hague in late 2002 of the kinds of military and logistical support that they requiredm with the strong implication being that the reward was the appointment of Dutch Foreign Minister Jaap de Hoop Scheffer as NATO Secretary General at the end of 2003.

De Hoop Scheffer certainly had fans in Washington due to his insistence that a second UN resolution was not necessary to justify an Iraq invasion. Recent documents suggest that de Hoop Scheffer went against the advice of his ministry’s own legal department on this point, or at the very least, the dissenting opinions within his own Ministry were quashed by his highest civil servant, with or without the knowledge of his superior.

It is hardly surprising that the Americans would back an ideological kindred spirit to lead NATO. This usually means that if you can’t get a Brit (and George Robertson was the outgoing Secretary, ruling that option out), get a Dutchman. Some people still make a fuss of de Hoop Scheffer’s appointment, but for this reason I don’t quite see why, it speaks for itself. The real issue, surely, is this: Did Balkenende make national security deals with the US and then give them such importance that he hid them from both parliament and people? Did he decide alone that transatlantic relations stood above all other considerations of the national interest? Did he decide to go the obscure ‘political, not military’ route as a cover, to avoid having to do a Blair and face down parliamentary and public opposition to the war? Did the Dutch participate in Iraq 2003 after all, despite all the denials?

What makes this all the more poignant is that Balkenende, the man who took the decisions in 2003, who was provided with the famous ‘dodgy dossier’ from London, who went against the doubts of his own military intelligence service on Iraqi WMD capabilities, is still premier. With the exit of Bush all the other leaders closely involved with the 2003 debacle (both in the UN and in the Coalition) have left the stage. For this reason it has become a very personal issue.

On Wednesday a day-long debate took place in the lower chamber of the Dutch parliament concerning the need for a parliamentary inquiry into these questions. Since 2003 there had been 16 debates over Iraq in the Dutch parliament, all of which produced only stone-walling from the premier and his Christian Democrat cohorts. But during 2008 the higher chamber took up the baton and started bombarding the government with questions on Iraq, in doing so building momentum and allowing the opposition parties to once again demand a full inquiry.

This time they bit. Balkenende is under pressure because his coalition sub-premier, Labour party leader and Finance Minister Wouter Bos, has been garnering popular and professional respect for his handling of the ongoing financial crisis, and the Christian Democrats had to act. Against all expectations, Balkenende duly agreed to the formation of an independent commission, for which “there will be no straw placed in the way”.

The demand from the parliamentary floor had been for a full-on parliamentary inquiry, under oath, conducted in public. and on television, and under oath, so this was a second-best alternative. Also, the unanswered questions from the higher chamber can now be set aside and ignored. What is more, the commission doesn’t have to report its findings for nine months – after which, if deemed necessary, the parliament can still demand their own investigation.

There is still a sense, therefore, that Balkenende and the Christian Democrats are playing for time – time to shred perhaps? Stay tuned.