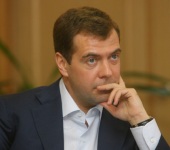 Presidents Dmitry Medvedev and Gurbanguly Berdymukhammedov failed Sunday to set a time frame for the return of Turkmen gas flows to Russia, halted since April after a pipeline blast that left Ashgabat short of revenues.

On a more positive note, the two leaders presided over the signing of a production-sharing deal between Turkmenistan and Itera, a Russian midsize private gas explorer, for Block 21 on the Caspian Sea.

But Sunday’s meeting had been expected to generate a breakthrough on the Russian-Turkmen gas trade. Relations were soured after Turkmenistan accused Russia of suspending imports because Gazprom faced reduced demand in Europe and did not want to pay for expensive Turkmen supplies.