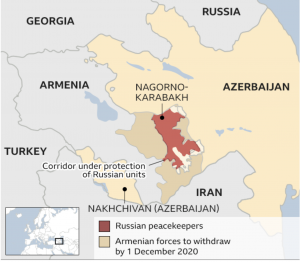 In this article, Ayla Göl discusses the recent conflict in the Nagorno-Karabakh region between Armenia and Azerbaijan. She places the fighting in the larger history of the tensions between the two countries over this disputed territory and argues both that the international community can no longer ignore this conflict and that COVID-19 made diplomatic efforts to end the fighting much more difficult.

While the COVID-19 pandemic currently preoccupies global politics, the conflict in Nagorno-Karabakh (NK) has ended on 10 November with a Russian-brokered peace deal after six weeks of fighting between Armenia and Azerbaijan. During this time, the Russian-brokered ceasefire was declared three separate times on 10, 18 and 26 October, but was the shortest-lived one since 1994. After clashes intensified on 27 September, Armenia and Azerbaijan continue trading accusations of each other attacking first. Violence has escalated that has internally displaced tens of thousands of people, destroyed thousands of buildings, and has taken hundreds of lives, including soldiers, since July 2020. This time is different, and clashes are more severe than the past that the human cost of the conflict is the highest of the last three decades. Armenia and Azerbaijan blame each other for breaking an agreement not to target civilians and residential areas with missile strikes, hence, violating a humanitarian ceasefire.

On 19 October, Azerbaijan’s President, Ilham Aliyev, announced that military forces had recaptured 13 more villages in Jabrayil district. Although Azerbaijan has the military potential to retake Armenian-controlled territories surrounding Nagorno-Karabakh and is ready to stop fighting, Yerevan does not recognise the internationally proposed Madrid Principles of 2009, which agreed to ‘return the territories surrounding NK to Azerbaijani control’. For some, the conflict has reached a stalemate. For others, the fighting is escalating into a regional war at the heart of Eurasia by making Nagorno-Karabagh probably the most ‘militarised’ region in the world. On 2 November, the United Nations (UN) warned that the attacks on civilians might amount to ‘war crimes’. The involvement of Russia, Turkey, and Iran brings the ‘internationalisation’ of the local conflict, but more caution is necessary before jumping on the ‘warmongering’ bandwagon. Nevertheless, the international community can ‘no longer ignore’ it.

A brief history of the conflict

Historically, the origin of the dispute goes back to the colonial rivalries between the Russian and Ottoman Empires. The modern disagreement over the Nagorno-Karabakh Autonomous Oblast (NKAO) has been about the clash of territorial integrity and national sovereignty between Armenia and Azerbaijan since 1988. Nagorno-Karabakh is a 4.400-square-kilometre (1,700-square-mile) enclave, emerged out of the historically complex ethnic configuration of the Transcaucasia when the Republics of Azerbaijan and Armenia gained independence.[1] It is internationally recognised within the territory of Azerbaijan but inhabited by ethnic Armenians, home to about 150,000 people. The NK declared independence in 1991, but is not recognised by the international community, including Armenia. The majority of NK expressed unification with Armenia on several occasions. In May 2020, when Arayik Harutyunyan was sworn in as a ‘de facto’ president of the Republic of Artsakh, a breakaway state from Azerbaijan, at a ceremony attended by senior Armenian officials and received condemnation from Azerbaijan, it was crystal clear the politics of conflict was going to be more nationalistic and aggressive this time.

The conflict in NK is one of the ‘frozen conflicts’ in the Caucasus region since the dissolution of the Soviet Union. The first Karabakh war of 1992-94 led to the deaths of at least 30,000 people and ended with a ceasefire where Armenia took control of Nagorno-Karabakh and its seven adjacent districts. More than a million people were internally displaced on both sides: Azerbaijanis were forced from their homes in Armenia, Nagorno-Karabakh and the adjacent territories, while Armenians fled Azerbaijan. In 1993, the UN Security Council adopted four resolutions (Nos. 822, 853, 874 and 884) on the Armenian-Azerbaijani conflict. Each of these UN resolutions stated that

They also expressed ‘grave concern at the displacement of a large number of civilians and the humanitarian emergency in the region.’ In 1994, the Russian-brokered ceasefire established the Line of Contact and brought fragile stability to a ‘frozen conflict’. Since then there have been periodic military clashes between the Republics of Armenia and Azerbaijan, the last most intense fighting happening in 2016.

The landlocked region of South Caucasus has geopolitical, geostrategic and geocultural importance. Geopolitically, it is subject to a shifting balance of power, which was traditionally established between Russia-Iran-Armenia and US-Turkey-Azerbaijan blocks. There are new players like Israel and India now. Geostrategically, it serves as a corridor for pipelines taking regional oil and gas to European and global markets. Geoculturally, it is at the heart of cultural clashes between Christian and Sunni-Shia divides that makes strange political bedfellows. Consequently, too many international actors (Russia, Iran, Israel, Turkey and the West – the US, France and EU) have a vested interest in managing the politics of NK conflict.

Meanwhile, international organisations (IOs) calls on all sides to ‘prepare their population for peace and not for war’ have fallen on deaf ears. Three decades of negotiations – mediated by Organisations for Security and Co-operation in Europe (OSCE) Minsk Group Co-Chairs representing Russia, France and the US – including regular meetings with Armenian and Azerbaijani foreign ministers have achieved nothing more than making diplomatic statements, such as in 2010 and 2017. The IOs expressed grave concerns and reiterated that ‘there is no alternative to a peaceful negotiated solution of the conflict and that war is not an option’.

Despite these international calls for peace appeals and diplomatic efforts for restraining the use of force, the politics of conflict has failed for three reasons: First, there has never been either common will or trust in proceeding with sustainable peace talks. The disputed Nagorno-Karabakh has become a political tool for internal rivalries and national rhetoric in Armenia and Azerbaijan that has prevented both sides from finding common ground for trust-building measures. Second, the classic power politics that primarily concern with the territorial integrity and sovereignty of states still rule that provoke the escalation, and this leaves no option besides the use of military force. Third, neither Armenia nor Azerbaijan is deeply concerned with the aspect of humanitarian casualties despite the UN resolutions and international law. Both sides have been using Russian-provided weaponry and launching long-range missiles at civilian territories on both sides of the Line of Contact in the past, but the clashes in 2020 drastically changed because of the global COVID-19 pandemic.

The unforeseen impact of the COVID-19 on International Community

During the COVID-19 pandemic, the OSCE Minsk Group Co-Chairs held separate virtual meetings with Azerbaijan’s foreign minister, Elmar Mammadyarov, and his Armenian counterpart, Zohrab Mnatsakanyan. In contrast, both sides held military exercises close to the frontlines. This time is different, and clashes are deadly because the pandemic has had three unprecedented consequences for the politics of conflict in Nagorno-Karabakh: the changing nature of international diplomacy, regional power brokers and virtual warfare.

First, the global pandemic has changed the nature of international diplomacy. The COVID-19 travel restrictions have made not only international travelling, but also vital face-to-face spontaneous diplomacy impossible. The pandemic impeded ‘person-to-person’ traditional diplomacy and put the international law on hold. However, virtual diplomacy is still a work in progress for setting a trustable format, in which effective and confidential negotiations can take place. Moreover, one significant measure of diplomacy is establishing genuine ‘people-to-people’ dialogue and civil society contacts in peacebuilding that have been obstructed by the pandemic restrictions.

Second, the pandemic’s suspension of the movement of international diplomacy reshuffled the network of regional power brokers. Both Armenia and Azerbaijan have been rethinking the priorities of national security and investing in the most recent military technology. They have been diversifying the types of arms industry and increasing the numbers of new weaponry, drones and missiles for more than a decade. While Azerbaijan has established a ‘strategic partnership’ with Israel, worth billions of petrodollars in arms trade, Armenia bought radar systems worth $40 million from India in March 2020.

Third, unprecedentedly, virtual reality, and non-human activities have been normalised during the pandemic that underscored virtual warfare. International reports prove that both sides are using high-tech warfare involving artillery, tanks, unmanned aerial vehicles (UAVs) and fighter planes. During the pandemic, a local small-scale conflict has turned into virtual warfare that undoubtedly takes more civilian causalities. I argue that the virtual warfare is winning over the virtual diplomacy that has taken all sides involved to a dead end at national, regional and international levels.

There are too many international actors that can lead to the ‘internationalisation’ of the local ‘frozen conflict’. This outcome will have broader regional implications but it is unlikely because international actors have fewer interests at stake, as experienced for the last three decades. On the regional level, Russia and Turkey are in a low-impact competition for power, prestige and influence. Ankara and Moscow are neither willing nor can afford being drawn into another conflict in the region. Iran is ready to act as a power broker while Baku has the upper hand in the conflict, and Yerevan has consultations with Russia on gaining assistance. On 10 November, following the peace agreement to end the conflict, hundreds of Russian peacekeeping troops have been deployed to the region. In short, it is a catch-22 for all sides.

To conclude, Armenian and Azerbaijani leaders have more at stake than external actors for peace and the future of their next generations. Let us hope that Baku and Yerevan will learn from their mistakes, and stop increasing the intensity of virtual warfare and high-tech arms rivalry, which only brings more wars and a humanitarian disaster to both sides. The winners of virtual warfare are always the big business of arms industries, and the losers are civilians with more casualties each day. The current situation in NK proves that the politics of conflicts and arms rivalries are inseparable bedfellows to keep the fever of nationalism alive globally, and even the COVID-19 virus could not beat locally in Nagorno-Karabakh. 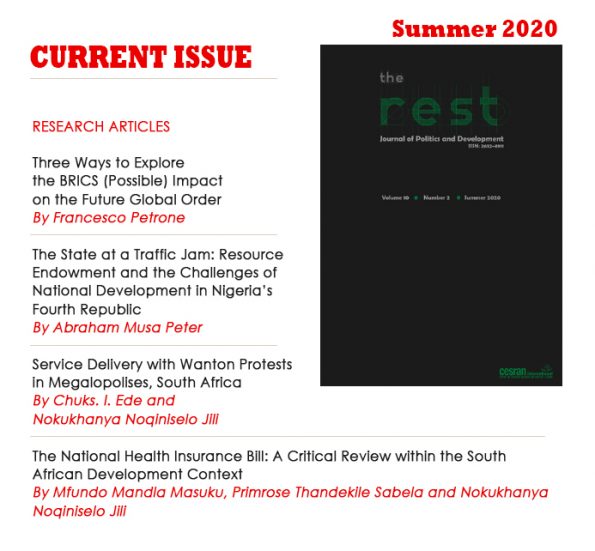 Previous post The 20th Issue of The Rest: Journal of Politics and Development is Out Now! 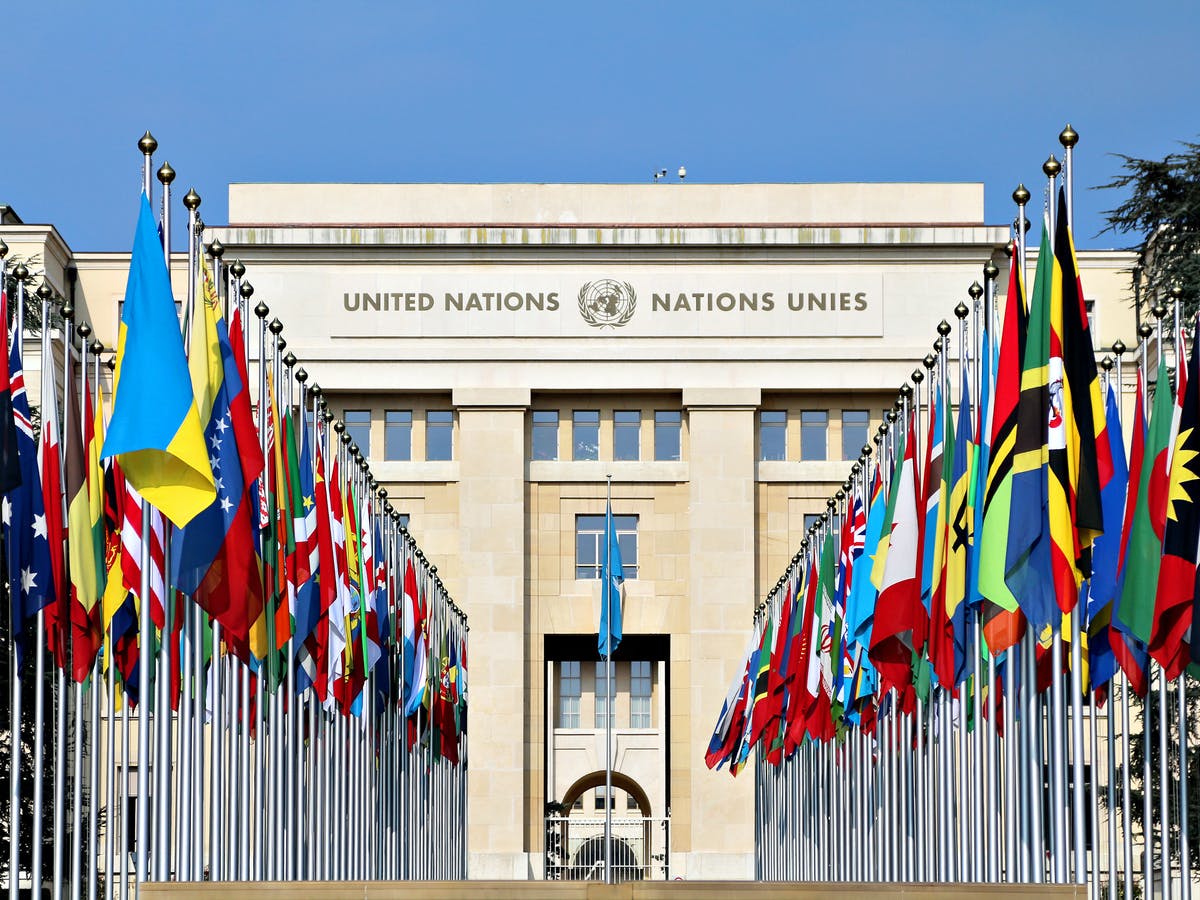 Next post The Jungle Grows Back How can We Redefine the Future World Order in the Tension of Power and Ideas?