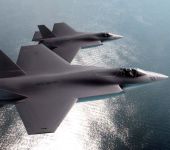 The U.S. government sounded out Japan in early April about pulling out all of the approximately 40 F-16 fighters from Misawa Air Base  in Aomori Prefecture, possibly beginning later this year, sources close to Japan-U.S. relations said Friday.

As part of the ongoing review of the U.S. defense strategy by the administration of U.S. President Barack Obama,  the United States at the time also told Japan of an idea to remove some of the more than 50 F-15 fighters at its Kadena Air Base in Okinawa Prefecture, they said.

Both of the proposals are pending, however, as Japan has shown reluctance due to concern about the situation in North Korea  and the possible impact on the realignment of U.S. forces in Japan.