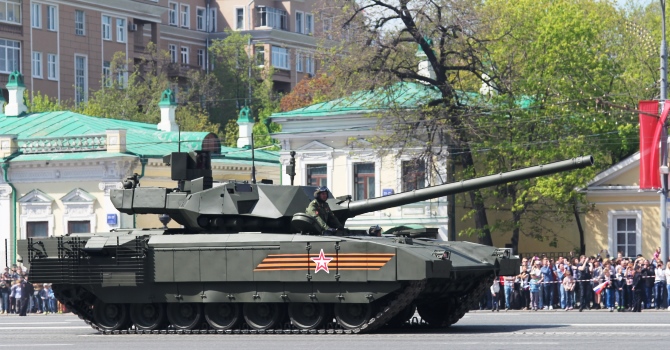 What the T-14 can tell NATO about a resurgent Russia The piece of advice Bismark accorded to the new German general staff after unification in 1871, “Russia is never as strong as she looks, or as weak”, in many respects has never been truer. Open diplomatic hostility with the West and massive cross-cutting sanctions since the annexation of The Crimea have shattered the Russian economy, including its military economy and import/export programmes.

Any thoughts that this might humble the Russian Bear and bring the country to a negotiated settlement quickly evaporated as the war of words between NATO allies and The Kremlin intensified and manifested itself in reciprocal war-games and exercises, the most serious of which was The Russian ‘snap’ exercise on the border of Lithuania. This was deemed so serious that Lithuania and Latvia convened an article four meeting of NATO. Reciprocal NATO training exercises were held in allied countries with perhaps the most contentious being the US unilateral manoeuvres in Operation “Dragoon Ride” that simulated a mechanised brigade powering across Europe to the site of any hostilities (which the Kremlin took to mean their enclave at Kaliningrad). This has generated so much concern in European circles that a new ELN report states that drastic action on communication is needed to avert a war.(1)

The propensity for Russia to launch surprise massive military drills almost literally on its neighbour’s borders, whilst not a new tactic of The Kremlins, has dramatically increased the likelihood of an accidental war through a game of brinkmanship, argues a new report from the ELN. Many news outlets have claimed this renewed cycle of war games amounts to the start of a Second Cold War, but this is impossible to discern from military exercises alone. After all, brinkmanship and surprise military manoeuvres are a well-used staple of states that are seeking to regain the initiative or take control of a narrative on the internal stage (for example it is one of the only ways the North Korea can act on the world stage). Far more worrying for NATO (and non-member) states bordering Russia is their new Main Battle Tank (MBT) – the T-14 Armata, and it can tell the world a lot more about Russian intentions than snap military exercises can.

Doctrinally, even throughout the Cold War, Russian heavy armour tactics have been focussed on providing fire-support for their infantry brigades (the last MBT battle in Europe taking place in 1943). Throughout the cold war this continued to be the case with US and NATO armoured capability designed specifically to spearhead, close, and neutralise this support ahead of infantry support. This Russian doctrine remained in place throughout Soviet interventions in Afghanistan and Chechnya and thence throughout the more recent conflicts in post-Soviet Chechnya and Georgia. Similarly rebel separatist forces in Ukraine have adopted an identical approach to their use of T-64s.(2)

The T-14 was unveiled to great fanfare at the annual VE Day parade in Red Square earlier this year. The slow trickle of information that followed had many analysts on both sides engaged in debate about what this new asset could mean for Russian heavy armour doctrine. Whilst the suggestion by the manufacturer that the tank is invisible to radar and thermal imaging was met with suspicion on all sides of the analytical spectrum, a smaller press release that told the world much about how The Kremlin would use this new MBT went by seemingly un-noticed.

In a release by Armata shortly after, the company stated that the new tank had a modular design, separating the crew and ammunition storage compartments. This is a significant shift in Russian MBT design and brings it into line with almost all NATO countries, specifically the US M1A1 Abrhams and the UK Challenger 2 MBT. Modular tank design dramatically improves crew survivability in the event the platform is struck by an ant-tank weapon system (either personnel-fired or self-propelled). An eventuality that Russia has never before seen fit to guard against in either the T-64 or the T-90.

Whilst it is debatable that the T-14 is “20 years ahead of anything the West has”(3), the modular design certainly brings parity with the closest NATO comparitors. The design, coupled with increased concern for heat and radar signatures (the main way a potential MBT adversary would locate it on a non-urban battlefield) is leading some to believe that The Kremlin has a more forward – anti-armour role in mind for its newest addition.

As Russia initiates its own strategic pivot, moving the bulk of its forces away from its southern borders guarding against Islamist insurgencies and ready to stage interventions in the old Soviet Republics to a more defensive/re-active role in the West and North (recent Kremlin leaks have indicated their General Staff see an Arctic war as increasingly likely), the T-14 fills a capability gap that The Kremlin have always grappled with. Namely, it now has an MBT capable of taking on US armour unilaterally, without the support of infantry, essentially neutralising the US “operation Dragoon Ride” that would be sent through to Kaliningrad.

Whilst snap military drills may be a useful tool in the Kremlin’s arsenal for maintaining control of an international situation that is increasingly slipping away, the T-14 offers a glimpse of a long term Kremlin thinking with regard to what capabilities it will need its forces to have in order to adequately defend against threats, real or imagined. At a time when the US and UK militaries are considering taking a more capability led approach to procurement that would offer a broader roles and longer shelf life of its armoured fighting vehicles, learning the lessons of fighting small wars, The Kremlin has made its decision and is base-lining against the toughest armour that NATO has to offer. 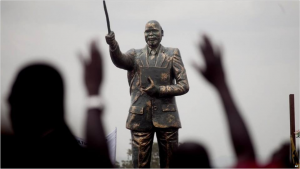 Next post Robots and AI: Utopia or Dystopia? (I)