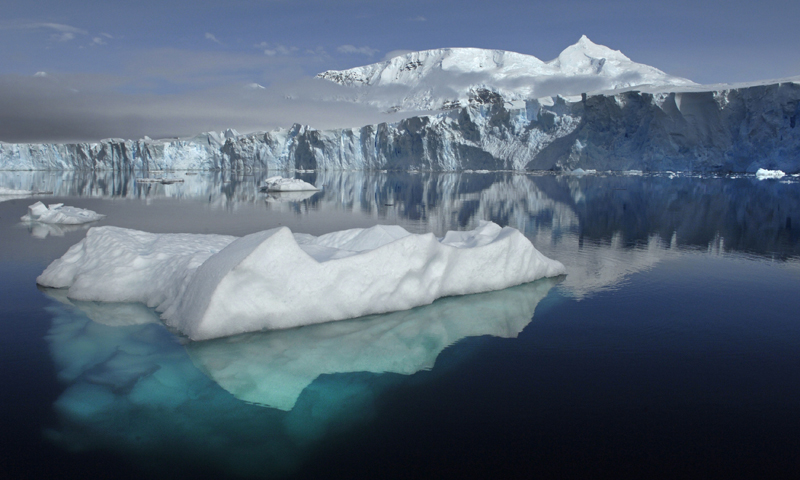 Studying climate is not something we invented in the 20th and 21st century. Humans have been observing environmental change associated with climate since the early 19th century when scientists first began to understand the property of gases. They noted that some trapped heat. Scientists also studied the field of geomorphology, the forces in nature that shaped Earth surfaces. This too was a field born in the 19th century and led to our understanding of past Ice Ages and their impacts on sea level and climate. The marriage of the science of atmospheric chemistry and geomorphology gave birth to what we now call climate science.

Even in the 19th century some scientists provided early warning of how industrialization could contribute to changes in the Earth’s atmospheric chemistry leading to significant warming in the distant future. By the 1930s the science had progressed to recognize the correlation between burning fossil fuels and atmospheric levels of CO2. A Canadian-born, self-described amateur scientist, Guy Stewart Callendar, was the first to note that atmospheric warming of up to 2 degrees Celsius was likely to occur by the 21st century based on human industrial activity. Callendar at the time thought that this anthropogenic warming would be good for the Earth and humanity. Maybe it was his Montreal birth and his sojourn in cold and wet West Sussex that influenced his opinion. In any event his observations went virtually unnoticed at the time. 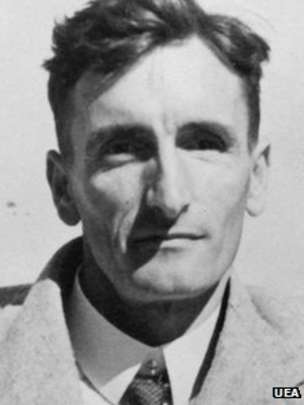 The skepticism of the time in hearing of the “Callendar Effect,” was that humans couldn’t possibly influence an entire planet’s climate through their activities. This skepticism remains with us until today among a small but vocal group who we call climate change deniers.

In the 1970s the Earth science disciplines that first provided evidence of climate change were now joined by paleontology, paleobotany, anthropology and archeology. The geological record with its copious supply of fossils provided clues of past climates. Paleodata from Antarctic, Greenland and mountain glaciers allowed us to sample atmsopheric chemistry from the past. Anthropology and archeology gave us clues on how climate had influenced the evolution of humanity and human society. By 1972 the first United Nations conference on the subject of the environment and climate was held and the modern field of climate science was born.

A planetary atmospheric scientist, Dr. James Hansen, working at National Air and Space Administration (NASA) in the United States, was part of a team developing computer-based climate models and published some early results in the journal Science in 1981 that predicted global warming from industrial gas emissions.

At the time Hansen’s observations were suborned by the much more exciting and dramatic discovery of the potential reason for the extinction of the dinosaurs. The year 1980 saw the publishing of a paper by Walter and Luis Alvarez, a father and son team, who proposed a hypothesis that geological evidence pointed to an asteroid impact with global climate consequences some 65 million years in the past.

The Alvarez’ theory became associated with the consequences of nuclear war, the human equivalent of an asteroid impact. The public were regaled with stories about a post-apocalyptic, human-induced, nuclear winter caused by the same kind of atmospheric disturbance and dust that killed the dinosaurs. The phenomenon was labeled “nuclear winter.”

The ozone hole in the upper atmosphere soon transferred from the pages of scientific journals to newspaper headlines as a major environmental crisis. The discovery of the cause told us that human industrial activity could create planetary-wide consequences. So much for those who had scoffed at “The Callendar Effect.” The decision to address the cause and create a cure in the late 1980s led to the first global agreement and mechanism for tackling a human-induced climate issue.

At the same as the ozone crisis acid rain emerged as another human-caused environmental issue. Once again governments acted to implement policies to address its global environmental impact.

Through all this period Hansen remained continued to study and describe the evidence of human-related climate change. He was asked to speak to Congressional hearings in the mid 1980s and stated to them that human activity would alter the Earth’s atmosphere in the next two decades making it warmer than any time in the past 100,000 years. His predictions of a runaway greenhouse effect caused by rising levels of CO2 and other heat-trapping industrial gases have proven to be accurate.

For this outspokenness Hansen has paid an enormous personal price (see the image below as just one of many personal attack examples). He has been targeted by climate change skeptics and organizations funded by fossil fuel companies. He has been subjected to personal attacks challenging his character rather than the science of which he speaks. 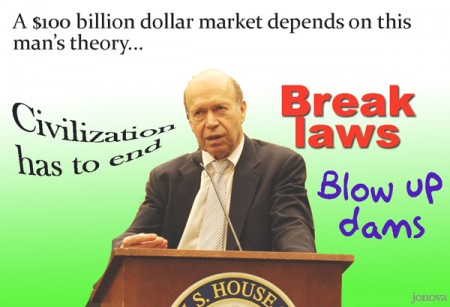 Throughout Hansen has stood his ground. And last Tuesday, March 22, 2016 was no exception. Hansen along with 18 co-authors including scientists from Columbia University, University of North Carolina, the NASA Goddard Institute for Space Studies, Institut Pierre Simon Laplace, the Chinese Academy of Sciences, Jet Propulsion Laboratory, University of California Irvine, western Carolina University, East Carolina University, the Helmholtz Centre for Ocean Research, and Mediterranean Institute of Oceanography, University of Toulon, published the latest peer-reviewed 52-page paper on climate change findings in the journal, Atmospheric Chemistry & Physics. The paper’s title is long but is a description of the science from which the conclusions are drawn. It is entitled, “Ice melt, sea level rise and superstorms: evidence from paleoclimate data, climate modeling, and modern observations that 2 °C global warming could be dangerous.“

Using climate simulations, paleoclimate data, and current observations of ice melt in Antarctica and Greenland, the paper states that continued high fossil fuel emissions for a protracted period in the 21st century with a concurrent temperature rise of 2 Celsius (3.6 Fahrenheit) degrees will yield the following:

The report states, “these predictions, especially the cooling in the Southern Ocean and North Atlantic with markedly reduced warming or even cooling in Europe, differ fundamentally from existing climate change assessments.” The image below is of Hansen along with a global map showing the cooling impacts to the atmosphere in those areas of the ocean associated with the slowdown in circulation. 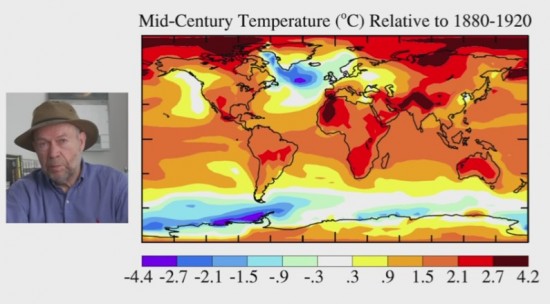 The altering of ocean circulation patterns as a consequence of atmospheric warming and glacial melt is the differing factor. Similar occurrences in dramatic ocean circulation changes have been documented from the paleoclimate record dating back more than 100,000 years.

Hansen describes  2012’s Hurricane Sandy as probable evidence of a powerful storm produced from the slowdown in North Atlantic Ocean circulation. The cooling in the Southern Ocean and North Atlantic shown on the map above is, in Hansen’s view, further evidence of this slowdown.

The authors of the paper state, “If the ocean continues to accumulate heat and increase melting of marine-terminating ice shelves of Antarctica and Greenland, a point will be reached at which it is impossible to avoid large-scale ice sheet disintegration with sea level rise of at least several meters…..The economic and social cost of losing functionality of all coastal cities is practically incalculable.” 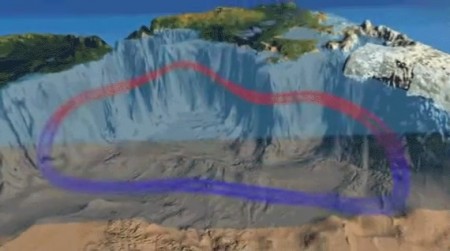 Compare these statements to the more nuanced approach taken by the numerous reports generated by IPCC which predict a more subtle rise in sea levels this century. Why is there a difference? The authors point out that ocean circulation patterns such as those seen in the image above are not factored into any of the IPCC reports.

In a related 15 minute video Hansen states, “I think the conclusion is clear. We are in a position of potentially causing irreparable harm to our children, grandchildren and future generations.” Hansen summarizes the evidence using the words “points of no return,” “tragic” and “unnecessary.” He argues that we cannot continue to let coal, oil and gas producers dump pollutants into the atmosphere without impunity and states, “if we collected a gradually rising fee from fossil fuel companies [a carbon tax], we could phase over to clean energies….if done right it would spur the economy and create jobs.”

States Penn State climate scientist, Dr. Michael Mann, not a participant in the paper, “I’m always hesitant to ignore the findings and warnings of James Hansen. He has proven to be so very prescient when it comes to his early prediction about global warming.”

Is this study overstating the impact of a 2 Celsius degree rise?

Mann points to the projected amounts of melt water from the ice shelves, and Greenland and Antarctic ice sheets stating the numbers may be a cause for concern. He doesn’t believe melting rates will be as significant as stated in the paper. Even Hansen acknowledges that his peers will challenge the paper’s predictions and he describes these as a healthy skepticism common to scientific review.

So what should we, the public, conclude?

We owe it to ourselves to become more knowledgeable. We have to ask our political leaders if they understand the science and the consequences to humanity of further delay in establishing policies to move to a low-carbon future. Hansen back in the mid 1980s predicted we would experience warming in the first decades of the 21st century unlike anything seen on this planet in 100,000 years. He was right and along with his scientific peers who have co-authored this new study, is now telling us to pick up the pace in making low-carbon happen sooner than the foot dragging  we are witnessing from political leadership in the follow up after COP21 in Paris.

This article was originally published on 21st Century Tech. Read the original article. 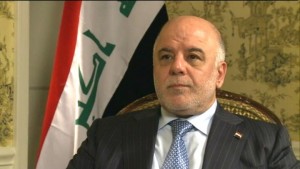 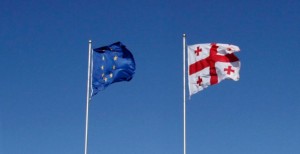