Deng Xiaoping’s motto “keep cool-headed to observe, be composed to make reactions, stand firmly, hide our capabilities and bide our time, never try to take the lead, and be able to accomplish something”, seems to have been set aside by the President Xi Jinping, perhaps, the most powerful Chinese leader after Mao Zedong.

It was announced in 2013 and includes 71 countries that account collectively for over 30 percent of global GDP, 62 percent of population, and 75 percent of known energy reserves. The BRI consists primarily of the Silk Road Economic Belt, linking China to Central and South Asia and onward to Europe, and the New Maritime Silk Road, linking China to the nations of South East Asia, the Gulf Countries, North Africa, and on to Europe. Six other economic corridors have been identified to link other countries to the Belt and Road Initiative.1

In fact, the BRI resembles to the Marshall Plan, officially known as European Recovery Program, (1948-1951) which was sponsored by the United States of America to rehabilitate the economies of 17 European countries in order to create stable conditions in which democratic institutions could survive. While the countries in the Marshall Plan received nearly $15bn, China is planning to invest in Europe around $200bn through the BRI. In addition, The Belt and Road Initiative is expected to cost more than $1tn, while China has already invested more than $210bn, the majority in Asia and to date, Chinese companies have secured more than $340bn in construction contracts along the Belt and Road.2 It is believed when the BRI is completed, it could cover over 4.4 billion people and generate a Gross Domestic Product of over $21tn.3

US Answers to the BRI

The China’s initiative as one of the rising powers in the world politics has had strong implications on one of the established powers, the United States of America. As an answer, the US government keeps expanding its infrastructure drive in the Asia-Pacific region. In doing so, the US is using new investment programmes in order to counter China’s aggressive overseas development policies.

On July 30, 2018, at Indo-Pacific Business Forum, US Secretary of State Mike Pompeo launched the new investment plan. According to Pompeo’s Top of Form “Indo-Pacific Economic Vision”, along with $113mn in direct government investment, the global spending cap for the development finance corporation would be doubled to US$60 billion. While the US invests $113m in new technology, energy and infrastructure initiatives in emerging Asia, it will also spend $25m to expand US technology exports to the region. At the same time, the US has also signed a $350m investment deal with Mongolia to develop new sources of water and hundreds of millions of dollars investment deal with Sri Lanka.4

The vision, has been put together in response to China’s BRI, is unlikely to be welcomed by Beijing. Moreover, it would worsen relations that are already fraught with trade tensions between the US and China.

EU Answers to the BRI

Since China has undergone a shift from an agrarian society to an industrial one, it has experienced a meteoric rise over the past forty years. While China rises, the EU has acknowledged the growing power and influence of Beijing and built up closely woven relationships with China and the countries in the Indo-Pacific and Asia. Whereas Europe is a major recipient of Chinese investments in key sectors like energy, telecommunications, and real estate, a majority of Europe’s trade is in the transit of goods through the Indian and Pacific oceans. More than 35 percent of all European exports go to Asia, and four of its top 10 trading partners are in the region. For export focused European economies, such as Germany, the Asia-Pacific is the second largest market after Europe.5

As a result, Europe has a clear interest in maintaining a trade flows in these countries. Moreover, the EU’s priority for this relationship is to maintain that on a rules-based order due to China’s assertive initiatives. For this reason, the European Commission has adopted a new “Connectivity Strategy”, which links Europe and Asia. The new strategy released on September 19 as a response to the BRI. By the new strategy, the EU puts emphasis on sustainability, proposing that investments should respect labour rights, not create political or financial dependencies, and guarantee a level playing field for businesses.6

In particular, China’s entire or partial acquisition of ports in Belgium, the Netherlands, Spain, Italy, and Greece unsettles the EU. In addition, the agreement in 2014 between China and Montenegro on the financing for 85 percent of a highway construction project of Montenegro, with the estimated cost close to 25 percent of the country’s GDP was another fraught move for the EU.

Apart from the neighbourhood, the EU is also concerned with China’s treat of ignoring principles of reciprocity and aim of creating political and financial dependencies in the Indo-Pacific. For instance, Sri Lanka has been unable to repay Chinese loans for the construction of the Hambantota port. As a result, the port and surrounding acres of land, strategically located at the crossroads of the Indian Ocean, the Bay of Bengal and the Arabian Sea, will now be under Chinese control until the year 2116.7

Along with the “Connectivity Strategy”, the EU is proposing to offer its own money and expertise for future infrastructure construction in the countries of Indo-Pacific and Asia. Since the demand for infrastructure construction in Asia is around $2tn a year, there is plenty of scope for both Europe and China to work in the same market. The EU’s current plans are to set up a $70bn fund that would act as backing for investors, and that fund could raise more than $350bn between 2021 and 2027 by attracting commercial investors into projects.8

Following the end of the Cold War era, the Eurasian landmass was opened up for the new actors. While the US was playing the new version of Atlanticism card, China was relatively neutral and the Russian Federation was struggling to manage its transformation from the USSR. Since the geostrategic and geopolitical environment has changed in Eurasia, NATO, one of the significant tools of Atlanticism, was also looking for a raison d’etre on both realms; politically and militarily.

Whereas ideology-driven Atlanticism has been prioritising the securitization of the Eurasia, China’s development-oriented approach has been more promising for the countries, which are in need of reconstruction and development. In particular, comparing the US and the EU’s aids to the countries in the Eurasia to the Chinese investment under the umbrella of the Belt and Road Initiative clearly demonstrates that China has been getting the upper hand in Eurasia despite the wary of several countries on getting ensnared in China’s debt trap.

It is unequivocal that Geopolitical competition in Eurasia is rising. It seems that China has taken an assertive step in the right direction. And this step has implications for the established powers and regional rising powers. They are setting down a marker to demonstrate that they are part of the game. However, at the end of the day, the time will tell who will sustain and then be running the game. 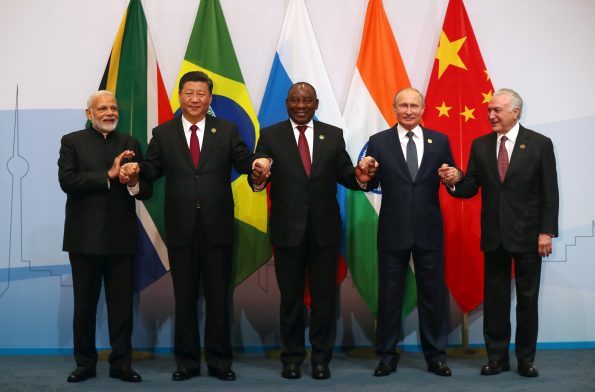 Previous post Emerging Powers and their Influence On Global Governance: The Threatening Case of the BRICS