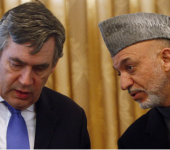 British Prime Minister Gordon Brown says the costly, lengthy fight in Afghanistan must go on, but he says he hopes security responsibilities can start to be handed over to local Afghans beginning next year.

Mr. Brown says after eight years of deployment, many in Britain want to know what their forces are still doing there and when will they be coming home.

At Tuesday’s news conference, Prime Minister Brown expressed once again his rationale for being engaged in the country.

“The reasons that we went to Afghanistan in 2001 are still the reasons we are there, that we are trying to protect the streets of Britain from al-Qaida and from the supportive work that could be done on their behalf by the Taliban both in Pakistan and Afghanistan,” he said.


But in a recent BBC poll, two-fifths of those questioned said they did not even know why British forces are in Afghanistan. And nearly two-thirds of them said they wanted the forces brought home as soon as possible.

Mr. Brown was asked about those sentiments being expressed up and down the country. He said his hope was that as more Afghan security forces and police are trained by NATO personnel, the British deployment can be reevaluated.

“I want to say to you today that we want to transfer district by district to Afghan political and military control starting next year, districts that we believe the Afghans can run themselves,” he said. “We want to reintegrate those people who are today perhaps part of the insurgency but prepared to abandon violence and prepared to join the political process and we want to ensure that the Afghan government is free of corruption and therefore able to be a strong authority against any Taliban insurgency in the country.”

But contained in the strategy are many unknowns and as Mr. Brown said, he is also dependent on the decisions of others.

“I accept that we await the [U.S. General Stanley] McChrystal report’s acceptance; we await the NATO decision on that as well as the American decision,” he said. “I have actually led the way I saying that we are prepared to make the additional troops available for the Afghanistan strategy so we are able to show people that we have a strategy for the time ahead as well,” Brown added.

There are about 9,000 British troops in Afghanistan and Mr. Brown has made 500 more available. But public-opinion polls indicate support for the war is sliding.

Mr. Brown faces a general election by June. His Labor government is lagging far behind the opposition Conservatives and the war may very well be someone else’s responsibility in just over half a year.