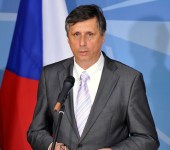 Biden met Friday with Czech Prime Minister Jan Fischer, who said his country is ready to participate in the new plan.

Biden said Washington will send a high-level defense team to Prague next month for discussions.
Prague had previously expressed disappointment in U.S. President Barack Obama’s decision to scrap plans to build a missile defense system in the Czech Republic and Poland.

Biden has assured the new system is a better way to protect both Europe and the United States against emerging missile threats from countries like Iran.

The revised plan focuses on short and medium-range interceptors, while the proposal conceived under former U.S. President George Bush was designed to shoot down long-range missiles.

The three-nation trip has aimed to assure Eastern Europe that Washington is not turning its back on the region.