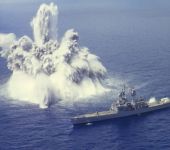 Iran’s and North Korea’s nuclear programs — not to mention the risk of loose nukes in Russia or Pakistan — are worrying enough. But a number of other countries are looking to join the nuclear club, with terrifying potential consequences.

Status: Substantial evidence points toward Burmese collaboration with North Korea in the development of a secret nuclear reactor and plutonium extraction facility. The reactor could be operational as early as 2014.

Why you should worry: Suspicions of a nascent Burmese nuclear weapons program are widespread. In July, U.S. Secretary of State Hillary Clinton publicly worried about military cooperation between North Korea and Burma, saying, “It would be destabilizing for the region. It would pose a direct threat to Burma’s neighbors.” Clinton’s worries are validated by the reports of two recent Burmese defectors, one a former business executive involved in Burma’s nuclear contracts, and the other an officer in a secret nuclear battalion in the Burmese Army, whose roles in Burma’s clandestine nuclear program were described in the Sydney Morning Herald.