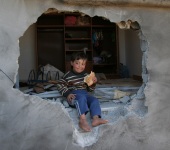 The UN human rights council has endorsed the Goldstone report on Israel’s war on Gaza, which accuses the military of using disproportionate force as well as laying charges of war crimes on Israeli occupation forces and Hamas.

The council’s resolution adopting the report was passed in Geneva by 25 votes to six with 11 countries abstaining and five declining to vote.

The inquiry, lead by Justice Richard Goldstone, calls on Ban Ki-moon, the UN secretary-general, to monitor whether Israel and Hamas conduct credible investigations into the conflict which took place last winter.

Should the two sides fail to do so, it calls on the UN Security Council to refer the allegations to the International Criminal Court.

The Palestinian Authority had initially agreed to defer a vote on the UN-sanctioned report, but later backtracked under domestic criticism.

Against: US, Hungary, Italy, Netherlands, Slovakia and Ukraine

The United States and Israel were among those countries which voted against the resolution.

Mike Hanna, Al Jazeera’s correspondent in Geneva, said the vote was a “very strong victory” for the supporters of the resolution, but that the large number of abstentions was also “very significant”.

Mousa Abu Marzook, the deputy chairman of the Hamas political bureau in Damascus, Syria, told Al Jazeera: “We thank our people, all those who support to submit again this report to the human rights committee and all the countries who voted for the report.

“I think if the Palestinian Authority didn’t withdraw this report it will be more efficient and the result will be stronger than the resolution.

“We will co-operate with this report and we will establish a new committee to investigate.

In addition to endorsing the report, the resolution “strongly condemns all policies and measures taken by Israel, the occupying power, including those limiting access of Palestinians to their properties and holy sites”.

It also calls on Israel to stop digging and excavation work around the al-Aqsa mosque in occupied East Jerusalem as well as other Islamic and Christian religious sites.

Israel rejected the charges saying the resolution – drafted by the Palestinians with Egypt, Nigeria, Pakistan and Tunisia, on behalf of non-aligned, African, Islamic and Arab nations – threatened peace efforts.

A statement from the Israeli foreign ministry said: “The adoption of this resolution by the UNHRC impairs both the effort to protect human rights in accordance with international law and the effort to promote peace in Middle East”.

Sherine Tadros, Al Jazeera’s correspondent in Jerusalem, said: “Israeli officials we spoke to said that in their opinion most of those states that voted in favour of the resolution did so, not out of conviction, but really for their own domestic reasons – to cover up their own human rights violations.

“Whereas democratic states didn’t favour the resolution, either they didn’t vote or they abstained or they voted no.

“This has really been Israel’s line of defence from the beginning of this process – to try to discredit the Goldstone mission and the resolution by discrediting the human rights council itself.

“By saying that its members have always been overwhelmingly biased against Israel and really trying to land Israel in hot water whatever motion was in front of them,” she said.

The Goldstone report recommended that its conclusions be sent on to the International Criminal Court (ICC) prosecutor in The Hague if Israel and Hamas do not hold their own credible investigations into allegations of war crimes within six months.