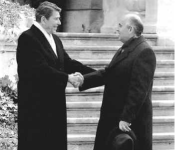 The 20th anniversary of the 1989 East European revolutions has re-opened contentious debate over who won the Cold War and what caused Soviet communism to disintegrate so rapidly in its final years. The fall of the Berlin Wall in November 1989 was a symbolic milestone, heralding the break-up of the Soviet Union two years later. Looking back, many people directly involved are still asking: Was Soviet communism defeated? Was it overthrown? Or did it simply collapse from within?

The rapid succession of events which marked the end of the Cold War is not in dispute. Poland’s historic roundtable talks between the banned Solidarity trade union and the ruling Communist Party took place in the spring of 1989.

Within months, Hungary had reintroduced a multi-party system. By the end of the year, the Velvet Revolution in what was then Czechoslovakia saw dissident playwright Vaclav Havel elected president.
And on the night of November 9, tens of thousands of Berliners flocked to the wall which had divided their city since 1961.

The timeline of these events is clear. But controversy still surrounds the question of why Soviet communism crumbled so quickly.

Czech President Vaclav Klaus has consistently argued that the system collapsed from within.

“Since the very beginning, I have been advocating the rather unpopular concept that communism was not defeated, [but] that it collapsed or simply melted down … Communism was at the end of the 1980s already too weak, soft, old, and emptied of all meaning to exist much longer,” Mr. Klaus said.

Joseph Nye is an influential foreign policy expert and former high-ranking Clinton administration official. Nye agrees with Mr. Klaus that the primary causes of the Soviet collapse were economic failure and the decline of communist ideology.

He says that from the 1970s on, the Soviet economy proved unable to adjust to an increasingly information-driven global production system. Nye also points to what he calls the exhaustion of communist ideas he says had become “authoritarian and dictatorial” under Stalinism.

“So, by the time the Berlin Wall fell in 1989, it fell not under a barrage of artillery, but under hammers and bulldozers wielded by people who had lost faith in the ideas,” he said.

But Nye says the choices made by Mikhail Gorbachev following his 1985 appointment as general secretary of the Soviet Communist Party hastened the collapse.

“He wanted to save communism but in the process of trying to save it, he accelerated its demise … So his policies of perestroika, [or, economic] restructuring, and then glasnost, or openness, speeded up the disintegration of the Soviet empire,” Nye said.

He relates a conversation with the former Soviet leader’s closest advisor, Alexander Yakovlev, about how top Kremlin officials came to view the system as permanently flawed.

“Yakovlev said … that ‘we tried initially, during the first three years of Gorbachev’s tenure, to improve the system – [to] accelerate it – but keep it intact. And we found in 1988 … that it was unreformable. You could not change it. Therefore, steps were taken virtually to abolish it,'” Pipes said.

While systemic failure was the key factor for some observers, others highlight the role played by individuals working to defeat Soviet communism from within.

“It has collapsed because of the conscious work of [a] new generation of opposition inside [the East European satellite states] which worked for two decades on building up an alternative system of information, knowing that’s the most important [objective],” he said.

“They all knew they have absolutely no possibility [to change] the system. They simply behaved morally, and that was very, very important. And I would say their moral example was irreplaceable. They clearly knew that all they can do is go to prison … and they did it,” Haraszti said.

He says reforms undertaken by communist dictatorships never lead to systemic change without an active opposition creating what he calls a “civil society movement.”

In July 1989, Mr. Gorbachev formally renounced the so-called Brezhnev Doctrine, a policy which had justified the Soviet imposition of communist party rule in the East European satellite states.

Richard Pipes says the decision was a watershed event.

“[Gorbachev] let the leaders of Eastern Europe know that if they took a path of reform the Soviet Union would not interfere militarily as it had done before in [1956 in] Hungary and in [1968 in] Czechoslovakia … If he had not done that, I think none of the reforms which occurred in Eastern Europe would have taken place … This was the key decision which made possible all the other events leading up to the collapse of the Berlin Wall,” Pipes said.

But he also says former U.S. President Ronald Reagan had an “enormous impact on the fall of communism.”

Helle Dale is a foreign affairs specialist at the conservative Heritage Foundation.

“The critical importance of American leadership … happened through military deterrence of the Soviet Union … and it also happened through the power of international broadcasting and public diplomacy from the United States that carried on the ideological fight behind the Iron Curtain,” Dale said.

But Nye tells VOA that while the power of U.S. ideas and its ability “to deter Soviet aggression” are essential to understanding the end of the Cold War, neither are root causes.

“The collapse of Soviet communism … was a process of erosion … I think to call it defeat creates too much of an impression that it was from the outside. I think a good deal of what happened was from the inside.”

Twenty years after the fall of the Berlin Wall, the debate continues. The definitive history of the Cold War’s end clearly has yet to be written.

Previous post IAEA Seminar Looks at Opportunities and Challenges for Nuclear in the 21st Century
Next post The Long War on Terror: Obama Administration Plays Politics with Guantanamo