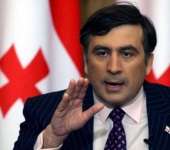 War, political instability and economic crisis. Despite it all, Georgian President Mikheil Saakashvili has endured in office. And a year after Georgia’s devastating war with Russia, Saakashvili’s staying power is an image the Georgian government is eager to convey.

In an August 6 interview with Imedi television, Saakashvili stressed that only individuals who are “absolutely marginalized” blame his government for the war last August, a conflict that led to huge loss of territory, created tens of thousands of displaced persons, and made possible the establishment of Russian checkpoints just an hour’s drive from Tbilisi.

Critics and some analysts say that Saakashvili has banked on Moscow’s aggression — and his domestic opponents’ weaknesses — to hold on to power and to strengthen international support for his administration, even though there are lingering questions about his role in the 2008 war with Russia.

The government counters that he has prevailed because he possesses an attribute that appears throughout the entire history of Georgia’s torturous ties with Russia — staying power. On August 6, the government detailed its findings on the war’s origins in a new, 40-page report that played on that message. Using military records and other documents, the report argues the August war was the direct consequence of two decades of Russian aggression against Georgia.

That message also echoes throughout the official August 7-8 commemoration of the 2008 war, most of which is taking place in Gori, the Georgian town occupied by Russian forces for nine days last August.

Rock concerts, photo exhibits on Russia’s “200-year occupation” of Georgia and on the collapse of the Berlin Wall — along with youth-led protests against the Russian military presence in breakaway South Ossetia and Abkhazia — took top billing on August 7. And at 3pm, Georgians commemorated soldiers killed in the war with a minute of silence.

Occasionally bizarre elements of street theater also entered the mix. On the morning of August 7, two store mannequins dressed up as male soldiers stood guard at a pseudo border post on Tbilisi’s central Rustaveli Avenue. The post marked the start of an outdoor exhibit that featured the lists of Georgians arrested during the early days of Soviet rule and photo overviews from Georgia’s wars in the early 1990s with breakaway Abkhazia and South Ossetia and, most recently, Russia.

At parliament, another pair of soldier-mannequins — of unclear citizenship — were placed moving up the front steps; a lone mannequin, adorned with an ink-drawn moustache, stood next to one of two armoured personnel carriers placed outside.

But a serious message stands behind the theater. It is a message that Saakashvili has repeated over the past year, and successfully used to deflect public outrage and weaken domestic opposition, according to analyst Tina Gogheliani. “[He] managed to redirect the aggression that was toward him — from the opposition and from other groups of society — toward Russia,” she said.

In a televised August 6 meeting with opposition leaders, Saakashvili stated that the government and its opponents “are united by one thing: love for the homeland . . . in the face of the enemy.”

Opposition leader Davit Usupashvili holds that one of Saakashvili’s main victories has been his ability to turn the conflict with Russia to his advantage in the international community. Usupashvili, leader of the Republican Party, maintains that Saakashvili “blackmails” the international community into supporting him regardless of his democratic track record. “Saakashvili is very effective at blackmailing those governments and leaders and he achieved the situation when leaders of democratic governments and international organizations are weighing their words . . . in order to avoid strengthening Russia’s position,” he said.

Gogheliani, a political analyst with the International Center on Conflict and Negotiation, believes that Saakashvili’s policy of unite and conquer has worked so well that he has not had to make any real sacrifices to stay in power.

After months of political protests, he has not fired any major member of his government, given up control over any ministry or agreed to early elections. Rather, it has been the government that has called for dialogue and compromise — moves the opposition terms PR gestures. In addition, the country’s economy suffered multiple blows following the war, including the global financial crisis and extended protests in the capital. Tens of thousands of Georgians displaced by the war have flooded into Tbilisi and other parts of the country.

Over $4.5 billion in international aid, secured at a donor conference, has helped soften the economic blows, but the Georgian economy is still expected to contract as much as 1.5 percent this year, according to Prime Minister Nika Gilauri. Unemployment is now a concern. Economist Davit Narmania maintains that roughly 2.5 percent of Georgia’s official working-age population of roughly 1.9 million lost their jobs after the war.

Alexander Rondeli, the head of the government-friendly Georgian Foundation for Strategic and International Studies, says that Saakashvili’s ability to negotiate all these political landmines is a testament to his skill as a politician. “There is a fundamental mistake in the assessment of Saakashvili,” Rondeli said, referring to the widely held opinion that the 41-year-old leader is “unstable and very impulsive.”

“[H]e is a very cold-blooded politician, cold bloodedly calculating everything,” said Rondeli. “He is not taking decisions in just one moment.”

Rondeli maintains that Saakashvili has developed into a more mature leader during the course of the last, turbulent year. Usupashvili, however, argues that whatever lessons Saakashvili has learned have been “wrong.”

“He is learning lessons [about] how to do his dirty political job in a less painful way for him,” he noted dryly.

Shalva Pichkhadze, an analyst and outspoken Saakashvili critic, cites the opposition’s “ineffectiveness” following the 2008 war — not the president’s political acumen — as the reason why he now has “no competitors. Said Pichkhadze: “I don’t think anything will hinder him [from remaining in power until 2013].”