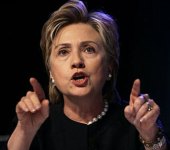 Hillary Clinton’s address to the Council on Foreign Relations on Wednesday was awful.

Sorry. I should be fair: if the speech was meant as a statement of US strategy, it was awful. Perhaps, however, that was not its intent.

Perhaps, for example, the speech was to given Clinton a bureaucratic boost in an increasingly tense conflict with other Executive agencies. For example, the National Security Council and the State Department have been sniping at each other for weeks. Last month, National Security James Jones went on an embarrassingly unsubtle media tour to prove he was very relevant. This, however, only angered Clinton’s people; have a look at columnist/lackey Jim Hoagland in the Washington Post last weekend to get a flavour of the bitterness.

Ostensibly, however, Clinton didn’t show up at the CFR to big herself up in the contest to be first after President Obama. Instead, she went on and on about how America would lead the world in the 21st century through “smart power”.

The concept isn’t new: it was coined in a Center for Strategic and International Studies report in 2007. And it’s not a strategy. It’s an approach, or rather a series of approaches, linked to an assertion of abstract values: “liberty, democracy, justice, and opportunity”. It has the merit, in contrast to the unipolar folly of the Bush Administration, of recognising that the US might need to consult and work with other countries and groups. On its own, however, “smart power” offers little in specific action to deal with cases of concern.

Take, for example, the passage of Clinton’s speech, amidst a hodge-podge litany of situations, on Iran. The Secretary of State began with recognition of the internal conflict:

We watched the energy of Iran’s election with great admiration, only to be appalled by the manner in which the government used violence to quell the voices of the Iranian people, and then tried to hide its actions by arresting foreign journalists and nationals, and expelling them, and cutting off access to technology. As we and our G-8 partners have made clear, these actions are deplorable and unacceptable.

“Deplorable and unacceptable”: so what would US “smart power” do in response? Well, nothing, really. Clinton had made her verbal posture merely to get to her preferred point of departure:

We [have] offered Iran’s leaders an unmistakable opportunity: Iran does not have a right to nuclear military capacity, and we’re determined to prevent that. But it does have a right to civil nuclear power if it reestablishes the confidence of the international community that it will use its programs exclusively for peaceful purposes.

Clinton did make token nods to other issues, “Iran can become a constructive actor in the region if it stops threatening its neighbors and supporting terrorism,” and she returned to the internal dimension, “It can assume a responsible position in the international community if it fulfills its obligations on human rights.” Her priority, however was clear: US-Iranian relations (and, for Washington, Iran’s relations with the world) would be set by the outcome of the nuclear talks.

Which is another way of saying, for this version of “smart power”, that those demonstrating in Iran don’t figure in the equation. President Ahmadinejad’s standing, and that of the regime, rises or falls not because of the handling of the election, the crackdown on protestors, or the mass detentions but because of its willingness to accept Washington’s line on an acceptable nuclear programme.

In cynical but pragmatic light, that might make sense if the Administration was committed to a resolution that would also open up co-operation with Iran on other vital regional issues. For example, an accommodation on nuclear energy would ease the discussions with Tehran on how to manage the Afghan intervention and political and economic development effectively. It would remove one possible obstacle to Middle Eastern talks, especially on Israel and Palestine.

Clinton’s framing, however, offered none of these important connections. This was a case of Nuke Talks or Else: “The choice is clear. We remain ready to engage with Iran, but the time for action is now. The opportunity will not remain open indefinitely.”

Which means what? The deadline of late September (previously end of 2009 but advanced by some officials in leaks to the press last week) before tougher economic sanctions are sought?

I’d be interested to see how US officials explain how those sanctions would benefit the opposition whose “human rights” are supposedly of concern. The economic effect would be merely more restrictions on the population while the political effect is to hand the regime another nationalist card — do you really want the Americans dictating what we can do?

(The sharp-eyed will note that many Iranians, irrespective of their position on the election, are blaming this week’s air crash near Tehran, with the loss of 168 lives, on Washington’s tight restrictions on aircraft and parts.)

The point here is not that the US should charge into Iran on behalf of the protests. It is that “smart power” reduces those protesters to irrelevance. The unsubtle signal is a pat on the head before turning back to “those who matter” — the Government — for the make-or-break talks.

The alternative? As my grandmother would say, “If you can’t say something nice, say nothing.” The nuclear issue is not exactly the Iranian Government’s chief concern at the moment. The US demand that it has to be Number One is a distraction from that internal reality and does nothing constructive.

So, want to be smart about smart power, Hillary? In this case…..