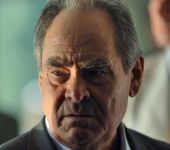 A nongovernmental organization in Tatarstan has proposed the republic’s president, Mintimer Shaimiyev, for a Nobel Prize, Kommersant reported Wednesday.

The NGO, Sozvezdiye-Yoldyzlyk, published an open letter asking the Nobel Prize committee to nominate Shaimiyev because his “confident rule” of the republic shows that “the future belongs to educated people of high moral guidelines.” The authors of the letter did not specify which Nobel Prize they thought that Shaimiyev deserved.