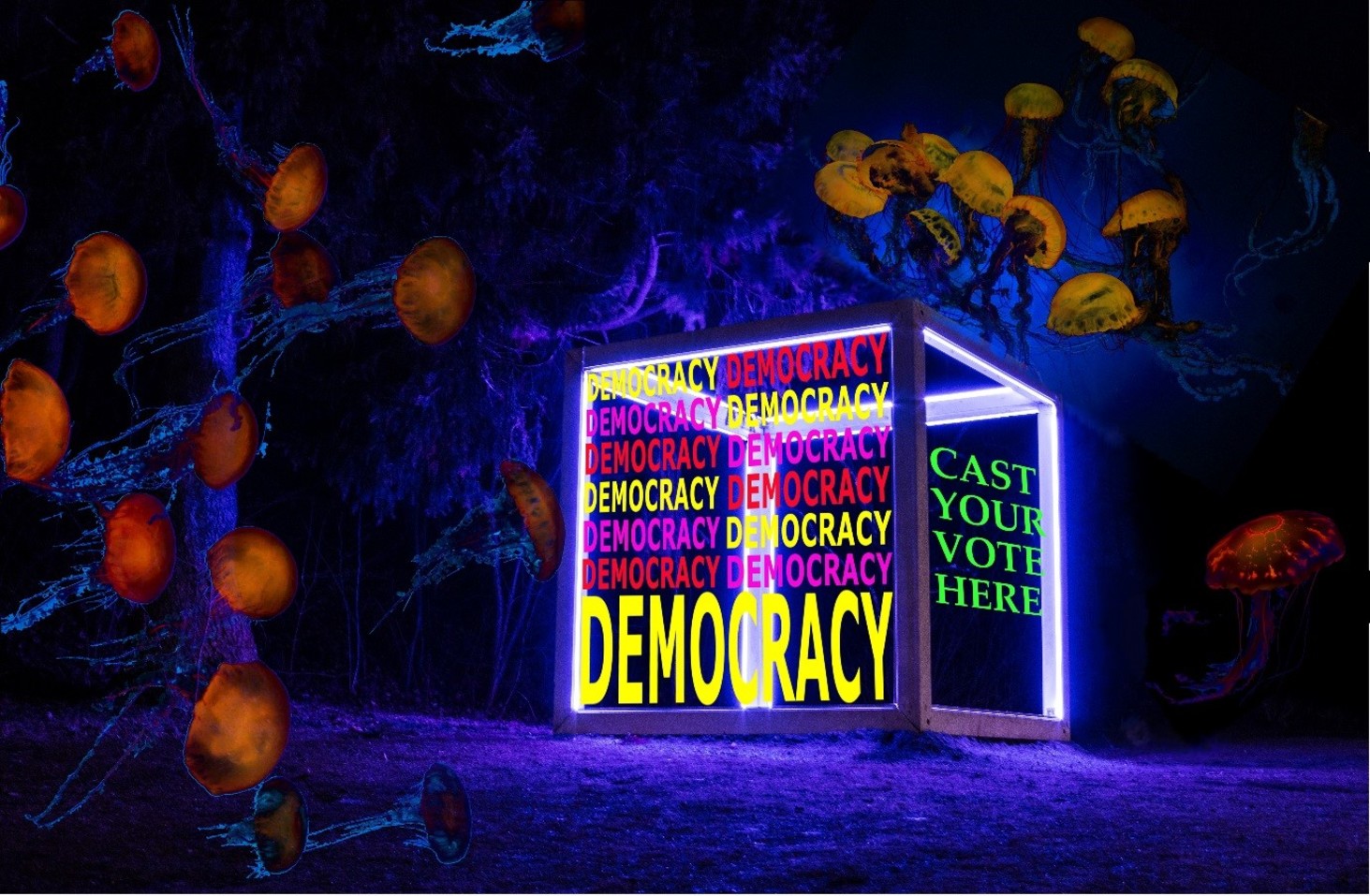 This is part one of a three-part essay that proposes a way of thinking about democracy that’s seldom, if ever, used. Despite the popularity in other disciplines of inter-species thinking, it’s ignored in democracy research. Why is that? Why can we not conceive of democracy as anything other than uniquely human? “Non-human Democracy” seeks to answer these questions.

Democracy changes with each of time’s footsteps forward.

Take the following as but one example. It’s 1997. Political scientists David Collier and Steven Levitsky publish a paper they call Democracy with Adjectives. They state that there are hundreds of different ways to describe democracy.

Since then, other prominent thinkers like democracy scholars David Held and Wolfgang Merkel have echoed this point, because it’s an important point to make. It shows democracy is complex – that it’s complicated, has a lot of parts to it, comes from a wide range of histories and is found in surprising places.

But when my colleagues Mark Chou, Selen Ercan, Giovanni Navarria and I went looking for Collier and Levitsky’s list of hundreds, we couldn’t find it. So we took on the task and discovered that democracy has no fewer than 546 different names.

We didn’t expect so many. And there are likely more out there.

Finding a start in democracy’s complexity

Aside from the work to describe, catalogue and otherwise make sense of this big data, our list offers plenty for critical investigation. If you were to use this dataset you could, for instance, compare and contrast thousands of different combinations of democracy.

Interrogating these many names broadens our understanding of what democracy is, or might be, or should be. There are visions of democracy’s futures in here whose stories go untold.

Evidence from Google’s Ngram on the frequency of word use supports the view that having so many names for democracy is a recent phenomenon. We’ve been using adjectives to precisely define, qualify, describe, adjust and justify what we mean by “democracy” for at least the last century. More names appear in the last 50 years than in the first 50.

It doesn’t look like we’ll stop naming democracy any time soon. That’s good, as we come to ask more of this style of government, this mode of governance, this way of life.

It’s because of the Ngram evidence, which suggests democracy got most of its names after 1920, that I think democracy changes as time moves forward. Philosopher Jacques Derrida explains: to name something is to give it meaning. It affixes a particular understanding, an idea of practice, or one or more values to it. Naming things changes them. And change happens over time.

Except sometimes it doesn’t when you’d expect it to. Despite more than 2,000 years of drawing metaphors and analogies between the political behaviours of humans and non-humans – think of Machiavelli comparing political leadership to foxes and lions, or Aristotle comparing us to bees – no-one has yet given democracy its non-human name.

There is only very seldom talk of the democracies found in other species. This means democracy hasn’t yet been changed in this way.

What talk there is comes almost exclusively from the sciences where scholars like honeybee specialist Thomas Seeley are trying to build bridges to the humanities. Seeley recommends that we should pick up tips to use in our own democratic practices from the ways of doing things, honed by evolution, observable in other species.

Perhaps this is why French sociologist Bruno Latour argues that democrats need to bring science into democracy. Or why Oxford fellow in politics Laurence Whitehead says we need to “enliven the concept of democracy” with metaphors and analogies found only in biology.

It’s common, obvious even, to find researchers in fields like engineering, chemistry and medicine who think about human problems. Less obvious, but still common, is that these researchers look for answers in the lifecycles and lifestyles of non-humans. As Christian List and Adrian Vermeule point out, scholars in these and more than a few other fields seek inspirations, lessons and analogies from non-humans.

Inspiration is normative. It’s the stuff of wonder. Of arguing how we “should” do things. We see magnificent spectacles in nature, often bordering on the mysterious, that enliven our imagination. These spectacles give us the will to innovate in helpful directions.

Lessons are the opposite. They’re grounded in the concrete, the measurable, the palpable. They’re all about the “how”. Tantamount to masterclasses, lessons are what we learn from closely studying the special techniques that non-humans evolved. They’re instructive.

Analogies, lastly, are a form of translation between the human and non-human. By comparing us and them, we transform ideas by adding or subtracting nuances in this way. Analogies, drawn between species, can help us see matters differently.

Consider the work to make flying robotic drones autonomous. The problem with unmanned drones is that most still require a human piloting them. They’re also limited in how they fly – which is essentially in straight lines and at considerable speed. Both issues limit the functionality of drones.

Bring in the neuroscientists, computational biologists, informatics and robotics engineers, and an answer to this problem takes shape. The Green Brain Project, housed by Sheffield University in the UK, mapped the neurons associated with sight and navigation in a honeybee’s brain. They then programed this information into a flying robot.

Not only can this drone fly without live human control and autonomously avoid obstacles in flight, it also flies like the bee whose brain was modelled for this project. The implications from this study are abundant, the applications of the “adopted” technology to real problems almost limitless.

This drone was inspired by the honeybee’s flying skills. Green Brain Project, Wikipedia

The point here is that the Green Brain Project wouldn’t have produced such wondrous visions for drones if it weren’t for the inspirations, lessons and analogies the team behind the project drew from the honeybee itself.

Look at spider’s silk for a further example. It’s famous for having greater tensile strength than steel and efforts are being made to manufacture it synthetically. One potential use is bullet-proof clothing.

Studies of termite mounds in some of the world’s hottest climates look to them for clues about how to make indoor climate control sustainable. Few species can rival the termites’ ability to efficiently maintain a constant, yet presumably comfortable, temperature inside their homes.

Then there’s the glue the humble barnacle produces to stick to things like the hulls of boats and the shells of sea turtles. Scientists are trying to replicate this glue because it not only hardens underwater but becomes stronger over time. It could be used, for instance, on surgical implants.

So why the democratic blindspot?

This all goes to show how helpful it can be to look outside our own species for answers to the problems we face. It’s precisely because of the pragmatism (practicality, functionality, usefulness) in this method that I’m surprised we’re not in the habit of using it for democracy’s sake.

Democracy has problems. Some of them, like how we or our representatives can make faster decisions of better quality, are intractable. They need innovative solutions.

So why not add to our ongoing efforts to solve these problems by studying the ways non-humans collectively overcome problems of their own?

We can develop inspirations for democracy, lessons that are relevant for it and analogies to help us differently understand its issues by using this commonplace way of thinking.

There’s a bounty of exciting, imaginative and practical work to be done in this area.

What might we learn about democracy from the wonders of nature? Adapted from Tomas Öhberg/flickr, CC BY-NC-SA

Objection: how can other animals be democratic?

A significant question now props itself on an elbow: democracy is only a relatively recent human invention, so why bother with this?

According to this way of thinking, there’s nothing that we can, or should be looking to, learn about democracy from non-humans because they don’t have it. It’s a product of the reflective political decisions and bitterly difficult but also gloriously simple victories that some humans have managed over the last 3,500 or so years. Democracy cannot manifest through genetic evolution.

Everything here hinges on what we mean by democracy and, consequently, how we justify our species’ exclusive ownership of it. If democracy is undoubtedly human, then my argument is finished. But if there is doubt on this, then a potential giant world, a conceptual Jupiter, becomes relevant.

This essay offers a recontextualisation of democracy; to pull back a curtain to reveal not a wizard nor a naked emperor but rather to show democracy’s immense and hitherto neglected – or simply unknown – complexity and to ask some questions that jump from it.

In this complexity is where ideas of time, space and species become relevant to democracy. This arises from thinking of democracy not in the span of hundreds or thousands of years, as is normally done, but over millions if not billions of years, as Francis Fukuyama and Christopher Boehm have of late been doing.

And it’s by thinking of democracy over the entire space of this planet, not simply the occidental spaces (Amartya Sen has long made this point), that our understanding of democracy changes once more.

We can think about democracy in terms of its many names, numerous typologies, various shapes, hierarchies of competing qualities, and of the utility in its techniques, like majority voting, used by different forms of life throughout this world. It’s an original take that opens new perspectives, helpful ones, but also a windfall of questions.

I’d like to ask a few of them next.

You can read parts two here and three of the essay here. 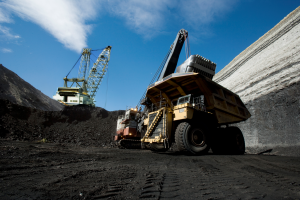 Previous post If We Are not Going to Burn Coal is There Another Reason to Mine It?

Next post Non-human Democracy: In the Anthropocene, It cannot be All About Us