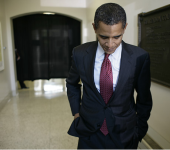 From the beginning of his administration, U.S. President Barack Obama said resolving the Israeli-Palestinian conflict would be a top foreign policy priority. After nearly 10 months of diplomacy, however, the peace process appears to be stalled and no negotiations are on the horizon. Some Middle East analysts say the failure to make progress is due, at least in part, to missteps made by the Obama administration.

Last January, on his second full day in office, President Obama named a special envoy to the Middle East as part of an effort to rejuvenate the Israeli-Palestinian peace process.

As George Mitchell met repeatedly with top Israeli and Arab leaders the new administration’s strategy to get the talks back on track began to emerge.

President Obama called for a total freeze on construction of Jewish settlements in the West Bank while his diplomats tried to convince Arab governments to make moves toward normalizing ties with Israel.

Palestinian President Mahmoud Abbas said a settlement freeze needed to be in place before high-level negotiations could begin.

However Israeli Prime Minister Benjamin Netanyahu rejected a settlement freeze and efforts by the Obama administration to make progress have stalled.

Mr. Netanyahu says he is ready to return to peace talks without preconditions.

David Makovsky is the author of a new book on the Israeli-Palestinian conflict (Myths, Illusions and Peace: Finding a New Direction in the Middle East) and is the director of the Project on the Middle East Peace Process.

“If you ask about the missteps of the administration I feel we [the United States] boxed Abbas in early on,” said David Makovsky. “When we said freeze, even though we did not say it as a precondition, he felt that he had to match the United States. Then we cut a deal with Israel and he felt politically exposed. I think we pay a price for raising expectations too high and that should be a cautionary tale always.”

On her recent trip to the region U.S. Secretary of State Hillary Clinton praised as “unprecedented” an offer by Mr. Netanyahu to limit, but not freeze, settlement construction.

Palestinian and other Arab leaders criticized her comments, which she defended after meeting with Arab foreign ministers in Morocco.

“They engaged me at length about what it is that Israel is offering, why I believe it is unprecedented, ” said Hillary Clinton. “We discussed how the position of the Obama administration has not changed. We do not believe that settlements are legitimate. We have said that repeatedly. And we have made that clear to the Israelis, the Arabs, the Palestinians, and the world.”

President Abbas, expressing concern about the lack of progress in the peace process, announced he will not run in elections scheduled for January and advisors say he may soon resign.

Ghaith al-Omari is a former advisor to the Palestinian president and is currently the advocacy director at the American Task Force on Palestine.

“It was a sign of frustration,” said Ghaith al-Omari. “It was a message mainly, primarily to the United States, but also to an extent to Israel. If you want to push me around, well I leave and let us see who you have after me.”

Al-Omari says Mr. Abbas’ decision not to run for reelection could be a moot point since he doubts the Palestinian elections will actually take place in January.

The militant group Hamas controls the Gaza Strip and so far is unwilling to participate in the elections.

Robert Satloff, the executive director of the Washington Institute for Near East Policy, says what he calls a truly amazing situation now exists in the Middle East.

Satloff says for a generation Palestinians have asked America to convince Israel to negotiate the terms of a Palestinian state. Now Palestinians are refusing to come back to such talks.

“When America and Israel want to try to bring the Palestinians to the negotiating table at least to talk about statehood and Palestinians, perhaps for very good reasons of their own, are balking, this is history turned upside down,” said Robert Satloff.

Satloff predicts it could now take years to reach a peace agreement between Israel and the Palestinians since other foreign policy priorities are likely to seize the attention of President Obama.

“In the foreign arena he is a reluctant war president,” he said. “That issue, more than any other foreign issue, dominates. In what we call the Arab-Israeli arena, or the broader Middle East, it is clear in my perspective that the Iran file has a higher and more urgent priority than this file. The stakes are higher, the urgency is greater and the clocks are ticking faster.”

For now, Secretary Clinton has begun to urge Palestinians to participate in lower-level contacts and talks with Israel to avoid a complete vacuum in the peace process.

The hope is that additional cooperation on issues such as economic development and security could create a positive momentum.

U.S. officials and analysts are concerned a void in the peace process may lead to events that could spiral into violence.

Previous post Iran: A Response to “What If the Green Movement Isn’t Ours?” (The Sequel)
Next post Palestinians to seek UN support