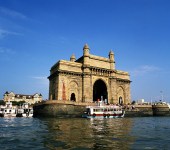 As I travelled from the airport to Marine Drive on November 27, 2008 the sun was setting and the roads leading from the Chhatrapati Shivaji Airport in the north of the city to south Mumbai were eerily quiet.

These highways, which I had known for years as the arterial life line of the city, were dead to all traffic.

There were few lights on in either the homes that line the road or the shops that usually await the evening rush hour customers.

As we sped past, everything was closed. It was as if the whole city was on strike or had shut down out of respect for a local funeral that was about to pass by.

Siddhivinayak Mandir is without a doubt the landmark Hindu temple in India’s second city. Situated at a major road junction it welcomes worshippers 24 hours a day.

Although miles away from the main sites of the attacks, the temple was closed – its huge iron gates locked tight, while police and special services patrolled its perimeter, their usual wooden batons replaced by machine guns.

This was more serious than anyone had imagined.

During our flight in from Doha, the situation in Mumbai had taken a more serious turn from the initial reports of sporadic gun fire.

By chance, my colleague Riz Khan had been in Mumbai, preparing to pre-record his own show for Al Jazeera. An experienced journalist, he had been on air for over 30 hours, feeding a news hungry international audience every development in this fast moving story.


I took over that evening, working alongside three of Al Jazeera’s roving reporting teams.

Returning a year later to the city that never seems to sleep, I see that things on the surface are back to normal.

There is a higher than usual police presence on the streets, but that may be because the first anniversary of the attacks is approaching.

The more visible differences are the marshals on school buses, policemen with guns and the extra personnel and technology employed at popular tourist sites and hotels to guard against attack.

During my first day back in Mumbai, I head out with my producer and cameraman to record some promos.

We decide to film outside the Taj Palace Hotel, the scene of one of the attacks. It sits majestically behind the Gateway to India on the southern most tip of the peninsula.

But as we start to set up, police officers tell us that we need permission to film there. Officials have now banned media crews from filming anywhere in the vicinity of the Taj or the Gateway.

It is laughable to see how much security has moved in completely the opposite direction.

The security services appear to think that restricting media access in the run up to the anniversary of India’s worst terror attack will deflate any criticism that could be leveled at them over their new security measures.

But all it has done is generate more controversy.

The police have set up camp around the Gateway and in true camping style they have pitched their tent, literally. Knocking nails into the monument they have attached a rope which also doubles as a washing line.

So while the media is kept at a distance, under the guise that we are a bad influence for damaging the reputation of the country’s historic landmarks, or worse still, a security risk, the security forces are doing just that by damaging the nation’s monuments.

For me filming has always been fun. The enjoyment involved in working on anniversary stories depends on the type of anniversary.

The Mumbai attacks gave me an opportunity to look into the lives of people touched by a moment of utter devastation and madness and unparalleled heartache.

Seeing the cold sweat on the forehead of a staff nurse at the Cama hospital as she recounted her ordeal of being in the building as it was attacked or meeting the daughter of a waiter who was killed at the Leopold café – these are experiences I shall never forget.

As the anniversary of the 26/11 attacks approaches I expect there to be a very dignified approach to the many memorial services that will be held.

The people of Mumbai have every intention of showing the world that they are made of strong stuff.

But behind this resolve, I am sure many will find it hard not to shed a tear for a moment in history that touched the lives of a nation.