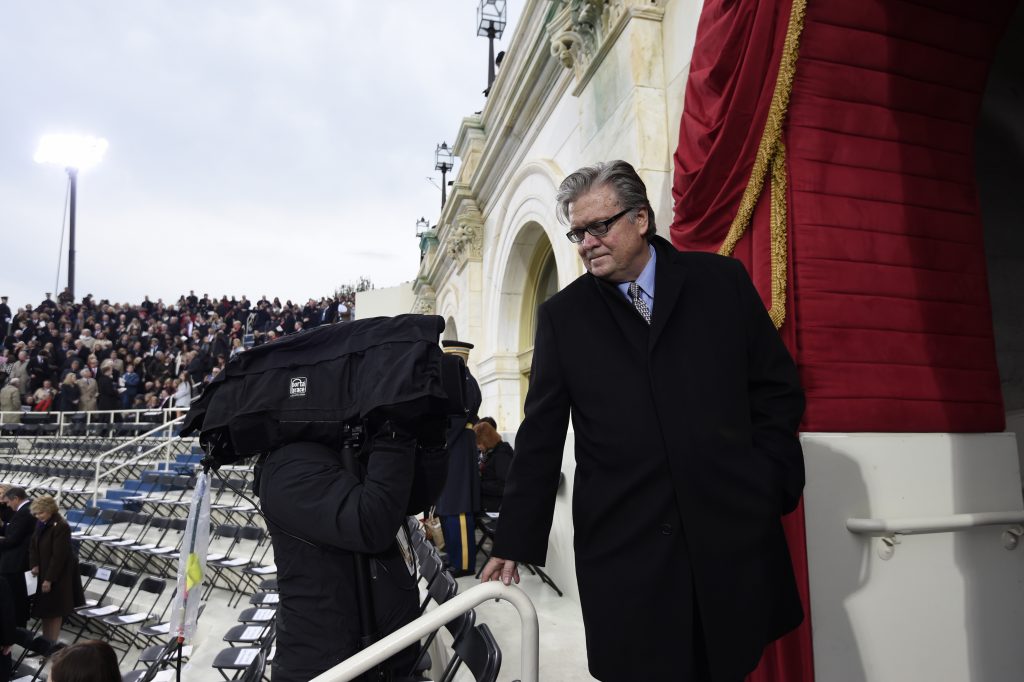 Steve Bannon’s departure as White House chief strategist was seen coming a mile away, but it is still sending shock waves of speculation over potential policy shifts by US President Donald Trump’s administration. The move re-energized the ongoing debate on whether President Donald Trump is going to end up impeached, with observers on both sides arming themselves with new arguments.

Those who see impeachment in Trump’s future interpret the firing of the CEO of Trump’s presidential campaign as a sign of the president’s growing weakness. They expect him to crack under pressure and continue to give up on his people as they become too heavy a political burden to carry. Now that Trump’s guardian angel is gone, the president could be more vulnerable to potential impeachment proceedings.

The other side argues that Bannon’s departure actually empowers Trump: He will now be either more independent in his decision-making or rely on the qualified expertise of his generals. According to this logic, however, that would result in Trump’s gradual transformation into George W. Bush 2.0, with more neoconservatives and hawks around his Cabinet. Trump himself would become more inclined toward foreign military interventions, which Bannon firmly opposed.

This is where the Russian debate over Bannon’s departure evolves to span Russia’s concerns about whether a more proactive American policy can be expected in the Middle East.

“Trump’s new Afghanistan strategy may not be all that ‘new,’ but it looks like Bannon opposed that kind of strategy. So the question is whether similar ‘policy amendments’ can be expected in the Middle East,” said a source in the Russian Foreign Ministry dealing with Middle Eastern issues who spoke to Al-Monitor not for attribution.

Bannon might not have been the architect-in-chief of Trump’s Middle East policies, but he definitely had a great deal of impact on the overall ideological aspect of these policies during Trump’s first seven months as president. Now that Bannon is gone, Russia is mulling over whether Trump’s choices in the region — where Moscow has inserted itself and developed serious stakes — will prove to be wins or losses for the Kremlin.

For Russia, which in its US relations has been prioritizing pragmatism over ideology, Bannon’s ideology was nonetheless rather convenient. Russian officials don’t share Bannon’s seemingly pathological distaste for all things Muslim. But regarding Syria, Bannon’s attitude worked well with Moscow’s in the fight against most of the Syrian opposition groupings the Kremlin pictured as “Islamist” — not only the internationally recognized Islamic State (IS) and Jabhat al-Nusra. It doesn’t appear that Bannon’s departure will pose more complications for US-Russia dealings on Syria — as minimal but important as they are — at least for the time being.

On Aug. 23, the Russian Defense Ministry announced that the Joint Monitoring Center in Amman, Jordan, had finally been established to monitor Syria’s southern de-escalation zone. The center grew out of Russian-American-Jordanian talks, the ministry noted. There’s also a telephone hotline linking Russian and American air operations centers, according to a recent report by Reuters, channeling 10 to 12 calls a day to help “keep US and Russian warplanes apart as they support different fighters on the ground.” The risks of miscalculations are still there, but such communication is even more important now that Washington and Moscow are working “to extend a demarcation line” that would separate forces on the ground supported by Russia from those the US supports. The line is supposed to run from southwest of Tabqa east to a point on the Euphrates River and then down along the river in the direction of Deir ez-Zor, which has become the last remaining stronghold in Syria for IS. The Russian Defense Ministry said Russia’s air force has been extremely active carrying out strikes on IS positions in the Euphrates valley in recent days, killing about 800 IS terrorists and destroying much of the group’s ammunition.

The Iran issue might be more complicated for Russia and the United States to deal with. The Russian expert community is split over whether Trump advisers will now more actively advocate for regime change in Tehran and for sinking the nuclear deal. Experts who believe this will be the case point to Trump’s inclination toward the Saudis’ anti-Iran narrative, as well as a consolidation of the hawks inside the US administration.

Those who disagree with that scenario, however, believe common sense will prevail and the United States will recognize that attempting to topple the regime isn’t in the United States’ best interests at this stage. Andrei Tsygankov, an international relations expert with the Valdai International Discussion Club and a professor at San Francisco State University, told Al-Monitor that it eventually boils down to “ideology and priorities.”

“To Bannon, China and Iran were key threats to the United States. Iran was a threat for ideological reasons; he used the term ‘radical Islamism.’ The rest was less important [to him], and both the Middle East and Afghanistan looked like needless distractions of resources. [National Security Adviser H.R.] McMaster is clearly a hawk, including on Iran. However, to him ideology is secondary. He lobbied for greater US military presence in Afghanistan and later for arms supply to Ukraine. North Korea is also on his radar screen, but not Iran, at least not at this point, so the [nuclear deal] will be preserved,” said Tsygankov.

Another subject that makes Russia uncertain of US behavior is a potentially more assertive stance by Israel.

After their Aug. 23 meeting, there were many reports that Israeli Prime Minister Benjamin Netanyahu had warned Russian President Vladimir Putin to take Israeli concerns over Iran’s growing presence in Syria seriously, or Israel would bomb Syrian President Bashar al-Assad’s palace in Damascus and negate the Syrian cease-fire deal negotiated by the United States and Russia.

Moscow has not yet commented on these reports, but it certainly recognizes Israel’s “grand spoiler” potential in these matters.

The view in Moscow is that although Bannon was one of the most pro-Israeli figures in the administration, there are still enough advocates for a greater convergence between the United States and Israel in the administration, not to mention Congress. Thus, counting on the United States to restrain Israel’s greater assertiveness is not an option. Moscow still hopes to maintain healthy relations with Tel Aviv and work through Israel’s concerns directly. At the same time, Russia’s not ruling out the worst-case scenarios. Russia has set up an air defense system with the Syrian military that links their communications and technical resources. According to Maj. Gen. Sergey Meshcheryakov, deputy commander of the Russian Aerospace Forces, the system now can destroy targets within 400 kilometers (about 250 miles) at an altitude of up to 35 kilometers (22 miles), Tass reported.

Russia is watchful of the domestic turbulence in the United States but will stay its own course in the Middle East. The flurry of Russian diplomatic activity over the summer — from Deputy Foreign Minister Mikhail Bogdanov’s constant meetings with Moscow-based ambassadors to the top-level encounters with regional leaders by Putin, Foreign Minister Sergey Lavrov and other high-ranking officials — suggest exactly this.

This article was originally published on Al-Monitor. Read the original article.