Re-Imagining the Other: Culture, Media, and Western-Muslim Intersections

Edited by Mahmoud Eid and Karim H. Karim, Re-Imagining the Other: Culture, Media, and Western-Muslim Intersections (2014) is a welcome contribution that provides a balanced insight into interactions between Western culture and societies with their Muslim counterparts. The volume’s overall concept indicates that the book is not merely a collection of thought-provoking scholarly studies, but also an intellectual statement in the face of simplistic discourses and narratives fueled by the decade-long and disastrous “War on Terror” and the recent emergence of anti-Islamic sentiments in a number of Western countries.

One of the volume’s primary goals is the exploration of the concept of the “Clash of Ignorance”, an idea first voiced by Edward Said in an interview given in 2001, which was then taken further by the volume’s editors in a 2012 article. The volume is therefore professedly influenced by Said’s ideas on Orientalism, with whom the editors agree that Orient and Occident are mere ideological constructs and that what is called the Orient is not inherently alien from the Western self. In line with the sound conceptual chapter written by the editors, the nine contributing scholars principally focus on various examples of the mutual intellectual ignorance between the West and the Muslim world, highlighting the cultural debt owed by the Self to the Other. The volume takes a multidisciplinary approach, as it investigates this complex issue from the perspectives of architecture, communication and media, conflict resolution, education, international relations, Islamic studies, law, literature, Middle Eastern studies, political psychology, politics, social anthropology, theology, and translation.

The introductory chapter by the editors provides a comprehensive overview of the concept of the “Clash of Ignorance” from a theoretical and historical perspective. Exploring the various layers of ignorance, the authors argue that ignorance is not caused solely by a lack of knowledge, but that it can also be regarded as a pre-constructed and even intentional state of mind in support of particular interests and struggle for power.

Jack Goody explores how early Muslims of the Arabian peninsula adopted the cultures of neighboring civilizations, and the ways in which Jewish and Christian thinkers contributed to the formulation of Islamic law, philosophy, and theology. The chapter by Nabil Matar investigates the accounts of Christian Arab travelers to Europe before Napoleon’s invasion of Egypt, highlighting the fact that unlike their Christian peers, Muslim Arabs remained relatively unaware of Western achievements. Mohammad R. Ghanoonparvar’s essay provides an insight on Persian writers’ perceptions of Europeans and Americans in the wake of European colonialism and before the 1979 revolution. This chapter also offers an intriguing glimpse of how returning Iranian émigrés view Iran and participate in an “othering of the former Self”. John M. Hobson explores the early roots of the Huntingtonian idea of the “Clash of Civilizations” dating back to the times of colonialism, which laid the foundations of later Western conceptualizations of Muslims and of the Other. In his own contribution, editor Mahmoud Eid provides a critical summary of stereotypical and homogenizing Western narratives on Muslims.

Yasmin Jiwani analyzes media narratives on Muslim men killing Muslim women in Western societies, shedding light on the continuity between colonial and actual perceptions and narratives. Karim H. Karim investigates the politically and ideologically motivated use of language and terminology in contemporary political and media narratives on Muslims, highlighting the potential of such loaded terminologies in fueling ignorance and even clashes. The essay by Richard Rubenstein is a brave attempt to challenge general views of religion being a potential cause of conflicts, exploring the important potential religion could have in conflict resolution. Though loosely connected to the otherwise integral corpus of the volume, the chapter by Salah Basalamah highlights the many ways in which translation can bridge gaps in cultural understanding between the Self and the Other.

Despite its declared ambitious goal of addressing the historical and contemporary ignorance towards the Other by both Western and Muslim societies, the essays largely maintain a focus on Western ignorance towards Muslims. With the exception of the remarkable contributions by Jack Goody, Nabil Matar, and Mohammad Ghanoonparvar, the focus largely remains on the already well-researched field of Western perceptions of the Other. Although adding relatively little to the existing knowledge of their own fields, the essays altogether underpin the editors’ general argument. This makes Re-Imagining the Other an important milestone in developing the concept of the Clash of Ignorance, and proves the potential for the authors to take the implications of the idea further, perhaps even moving beyond the conceptual and terminological framework set by Said. Re-Imagining the Other is not only a timely statement, but also an important contribution and a must-read for scholars and students working on Western and Muslim relations. 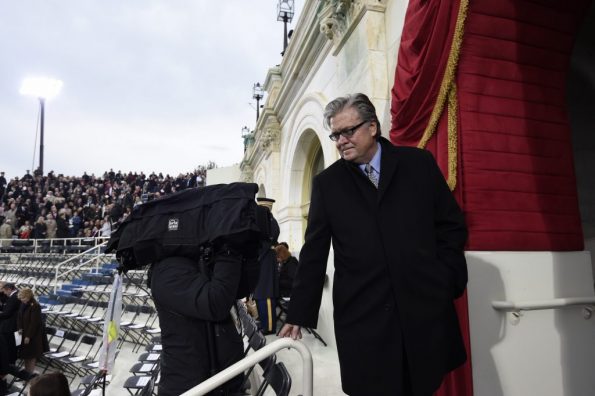 Next post Russia weighs in on Bannon-free White House