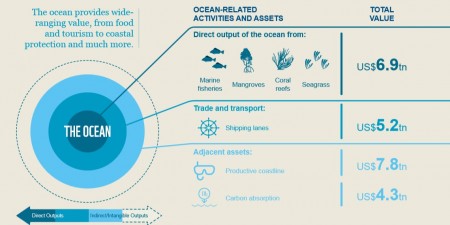 It is good to know that we humans have done our audit and determined what the oceans are worth. The chief architect putting a price tag to 70% of the planet is Ove Hoegh-Guldberg, an Australian marine scientist and director of the University of Queensland’s Global Change Institute.

Totaling up the ocean’s assets which include fisheries, shipping lanes and tourism Hoegh-Guldberg has come up with the number $24 trillion US. And in addition the annual value from ocean output is calculated to be worth $2.5 trillion. Note that the calculation doesn’t include all those deep water and offshore oil rigs, the methane hydrates on the ocean floor, the tungsten nodules that mining companies seek, or the wind, tidal and wave renewable energy projects sprouting up along coastlines.

So $24 trillion really is a significant underestimate of the asset’s real net worth. For those putting a dollar value on the ocean the number is considered a pretty good starting point. It makes the ocean the seventh largest economy in the world after the U.S., China, Japan, Germany, France and the United Kingdom. The dolphins, marine mammals and whales, phytoplankton, krill, coral reefs, fish, squid, octopi and other creatures must be thrilled to know their home and they have been appropriately priced.

Put a price on the ocean – why?

In treating it like it is a corporate balance sheet Hoegh-Guldberg and the World Wildlife Fund (WWF) are hoping to launch a new strategy – pricing will lead to protection and conservation because the immense asset value will finally be understood by the general public. The WWF, therefore, is making ocean as asset the way forward to ensure sustainability and survivability.

“The ocean…puts food on the table and underpins trillions of dollars of economic activity worldwide. It does all online casino’s this freely….Because the ocean belongs to everyone – and to no one…..It is time to change the way we see the ocean – from a place where we take what we want and dump what we don’t, to a shared resource of immense value.”

In the new report, entitled Reviving the Ocean Economy, Hoegh-Guldberg annd The Boston Consulting Group, make the economic case for ocean conservation establishing three priority actions for 2015 ( highlighted in bold) plus five follow up actions for the years to follow. These include:

The WWF’s final message to marine nations is this: we cannot afford to push the ocean economy into the red. Acting now will mean a sustainable future for the hundreds of millions of humans who depend on the ocean for food and jobs. Interestingly there is no mention of the rest of the biology that depends on the ocean for life. They don’t get to vote. 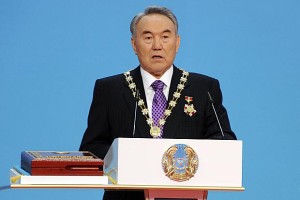 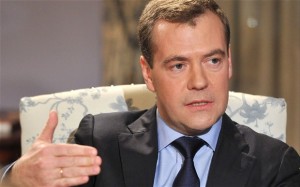