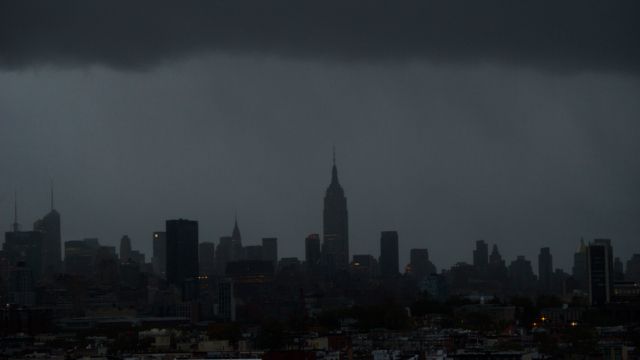 “Science fiction writers construct an imaginary future; historians attempt to reconstruct the past. Ultimately, both are seeking to understand the present.” Thus begins “The Collapse of Western Civilization: A View From Our Future” by Naomi Oreskes and Erik Conway, a tiny paperback that is really a 52-page essay, a work of fiction, set in  the 24th century and looking back at us in the 21st.

The author of this narrative is a scholar living in The Second People’s Republic of China, a nation born out of climate change, a survivor in the catastrophe created by us and our successors. Beginning with denial and obfuscation on the part of Western business and governments, the story outlines a probable history where warming events eventually lead to runaway temperature increases, attempts at geoengineering countermeasures that ultimately have unforeseen consequences, and finally polar ice cap collapses in both the Greenland and West Antarctica ice sheets.

Featuring four future maps, one labeled Amsterdam, a second New York City, a third Bangladesh and a fourth Florida, we see a redrawn world with major coastal cities and an entire country abandoned after valiant efforts to fight off rising sea levels fail. We read about the spraying of aerosols in the atmosphere in the mid-21st century to try and reduceglobal heating with temporary success, but with devastating effects on the annual Indian Ocean monsoons leading to mass starvation in South Asia.

Political entities as we know them cease to exist and few nations survive. One of the most telling statements in this book describes the collapse of past civilizations, the Maya, Rome, the Incas and others giving reasons for their demise. Often those living in these past empires could not foresee their demise. But in the case of western civilization the narrator states that the consequences “were not only predictable, but predicted.”

The narrator then justifies this statement laying out the case from the 1970s onward when scientists first recognized that humanity was altering the physical environment and for the first time dubbed this new geological period the Anthropocene. In 1988 there was sufficient concern globally for nations and scientists to construct theIntergovernmental Panel on Climate Change (IPCC). The idea was to track the science investigating human impact on the atmosphere of our planet and report back findings. In 1989 the Montreal Protocol represented the first model for international cooperation to combat ozone depletion in the atmosphere. In 1992 the world’s nations agreed to theUnited Nations Framework Convention on Climate Change with a common goal to prevent anthropogenic influences on climate. In 1997 the Kyoto Protocol was an extension of that earlier framework but the largest contributors to greenhouse gases and anthropogenic warming chose to ignore the signing and ratification. So all progress of any significant value stopped.

The climate change denial movement took hold with almost all of the “scholarship” and “skepticism” emanating from United States’ sources. Other nations soon followed the American lead contributing further skepticism on the issue. Canada, first a supporter of Kyoto, withdrew. Others like Australia initiated climate change action and then reversed themselves in two election cycles.

Science and scientists, the narrator states, were as much to blame for fueling the skepticism, In their pursuit of narrowly-defined research on aspects of atmospheric change, and in the language of science, their arguments often appeared incomprehensible to an inquiring public.

Probably the most damaging acts came, states the narrator, when nations finally agreed in light of successive years of new record temperatures and increasing extreme weather events, to begin the transition from fossil-fuel dependency through a transition from more carbon intensive fuels to less. This was the so-called middle path, switching off coal and turning on natural gas. Natural gas was less carbon intensive and therefore was seen as a stop gap to an eventual fossil free energy future. Fracking, the biggest source of shale gas, a methodology first invented in the United States, soon spread across the globe as many online casino nations made the transition. The increase in natural gas supply drove the price of fossil fuel energy down and consequently drove usage up. The potential for a lower carbon footprint was more than offset by the trillions of cubic meters of gas burned and the methane and carbon dioxide that escaped from fracked field wellheads.

By 2040 heat waves and droughts were becoming the norm. Sea levels had risen by 9 to 15 centimeters (3.5 to 6 inches). Some Pacific island nations had ceased to exist but coastal populations remained unaffected although storm surges were causing nations to build infrastructure to hold back the rising water. But for how long? By 2050 social order in Africa had completely broken down succumbing to drought, disease epidemics and crop failures. The North American Desert of the U.S. Southwest spread to the north and east engulfing vast amounts of formerly productive farmland. In the late 2050s the U.S. government faced food riots that led to the declaration of martial law. Soon, to manage depleting water resources collectively, and to deal with climate change refugees seeking northern escape routes, Canada and the United States formed a North American union. Similar redrawing of political boundaries occurred in Europe as populations abandoned the Mediterranean countries to seek refuge in more northerly climates.

The engineers finally convinced the world that it was time to launch aerosol injection climate engineering in 2059. Submicrometer-sized sulfate particles were sprayed into the stratosphere. Global temperatures subsequently dropped over the first three years of the experiment but in the fourth year the Indian Ocean monsoon stopped.  So the geoengineering experiment ended and, in the rebound, global temperatures rose 5 Celsius (9 Fahrenheit).

By 2060 the Arctic Ocean was ice free in the summer and even though all countries were now hell bent to transition to renewable energy the delayed impact of rising greenhouse gases continued to accelerate the warming. The final blow to western civilization came with the disintegration of the Greenland and West Antarctic ice sheets, first through destabilization in the 2070s, and finally in 2093 with 90% of the latter breaking away from the Antarctic continent. The subsequent 5 meter (16.4 foot) rise in sea levels led to what the narrator describes as the “Great Collapse.” 1.5 billion people became climate refugees just from sea level impacts. The mass movement of populations overwhelmed inland communities. Disease and starvation did the rest. Along with the billions of humans succumbing to death, 60 to 70% of all life on the planet was driven to extinction.

The survivors of the Great Collapse had to reconstruct civilization. By the 24th century, aided and abetted by the discovery of a lichen that sequestered carbon at significant levels, and by a prolonged Solar Minimum, the survivors began to see temperatures decline and sea level rising slow down. Civilization re-emerged to a very different world.

So ends the tragic fiction describing the collapse of the world we know today as told by a fictional historian living three centuries in our future. Reading it, some may scoff. But the description of the present and our current path is undeniably dead on. We can continue down this path and maybe the road ahead will diverge from this fictional ending, or maybe Oreskes and Conway will have proved prescient. 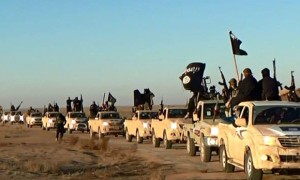 Previous post The Iranian Role in Iraq is Underreported 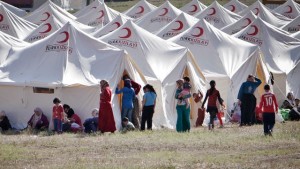 Next post Turkey Urgently Needs to Integrate Its Syrian Refugees