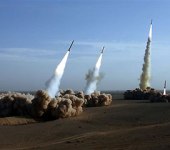 The media will be buzzing for the rest of the day about an American “scrapping” of its plans to base missile defense in sites in Poland and Czechoslovakia. Amidst the drama, it may not put together the story, which is as much about US-Iran relations and an Obama “grand initiative”, to be unveiled at the United Nations next week.

Here’s the inside story, which broke two days ago on Politico, but went largely unnoticed by the media. Last Friday, the United States delegation at the United Nations circulated a draft Security Council resolution on “Nuclear Nonproliferation and Nuclear Disarmament”.

This called on all states to join the Nuclear Nonproliferation Treaty (NPT — note: this includes Israel) and to join the Comprehensive Test Ban Treaty, which was resisted by the George W. Bush Administration. Any “situation of noncompliance with nonproliferation obligations [would] be brought to the attention of the Security Council, which will determine if that situation constitutes a threat to international peace and security”. (The text of the resolution is in a separate entry.)

It’s a stunning if risky move. The Obama Administration is hoping to move the agenda away from specific cases such as Iran towards a wider framework encompassing all existing or aspiring nuclear powers. In the short term, that means dropping the deadline of either September or December for Tehran to give way on all demands regarding its nuclear programme. The US had gotten itself into a very difficult position with that artificial date, as it faced pursuing further economic sanctions and thus jeopardising its talks with Iran on co-operation over issues such as Afghanistan.

Similarly, the pursuit of missile defense was looking more and more ludicrous. The obvious target was Moscow, but saying this or even letting it be assumed risked US relations with Russia across a number of issues. So the pretense was set up that the sites in Eastern Europe are the frontline against Iran, which was technically if not politically farcical. The Obama Administration thus risked committing itself to pouring away millions/billions of dollars on a system which made little sense.

Obama’s grand initiative has other political advantages. It seizes the limelight from President Ahmadinejad’s own trip to New York, and it reassures Western European allies who would prefer discussions on very real security issues rather than made-up ones. But will it work in the longer-term? Given the fraught nature of what passes for political debate in the US these days, expect a barrage of counter-publicity that this is a weak President caving into America’s enemies.

Previous post How to Engage Iran (If You Must)
Next post Iran Discussion: The Bombings, Jundullah, and the US