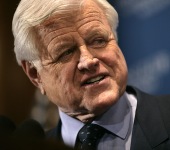 U.S. Senator Edward Kennedy, the elder statesman of America’s most famous political family, is dead at the age of 77 (born 2/22/32) after a battle with brain cancer. He was the youngest brother of slain President John Kennedy. The life of the Massachusetts’ Democrat was marked by both achievement and controversy.
Senator Kennedy was a champion of liberal causes, and over the course of his Senate career sponsored legislation that fundamentally altered worker rights, education funding, foreign policy and immigration law. His niece – President Kennedy’s daughter, Caroline Kennedy – says her uncle was an inspiration to her family.
“For more than four decades in the Senate, Teddy has led the fight on the most important issues of our time: civil rights, social justice, and economic opportunity,” she said.

Senator Kennedy was a vocal critic of Bush administration policies in Iraq, its stand on interrogation techniques used on suspected terrorists and its prosecution of the war on terror.  In an interview with CBS in 2007, Kennedy underscored his opposition to the war in Iraq.
“I voted against the war, it was the best vote that I cast in the United States Senate. This was the wrong war at the wrong time,” he said.
But Kennedy was also known to cross party lines to forge legislative deals with Republicans. In 2008, Kennedy saw an agent of change in Senator Barack Obama and became one of the first prominent Democrats to endorse Obama’s bid for the party’s nomination for president.
“My friends, I ask you to join in this historic journey to have the  courage to choose change,” he said. “It is time again for a new generation of leadership. It is time now for Barack Obama!”
Kennedy was elected to the Senate in 1962, the year before the assassination of President Kennedy. The senator offered a eulogy:
“My brother need not be idealized or enlarged in death beyond what he was in life. He should be remembered simply as a good and decent man who saw wrong and tried to right it,” he said.
In 1968, Robert Kennedy was assassinated while campaigning for president.  Suddenly, the youngest Kennedy brother became the family’s political patriarch.  At first it appeared that he might have a clear path to the White House. But those hopes ended in 1969 when the senator drove off a bridge and the young woman with him, Mary Jo Kopechne, was killed.
His behavior during the so-called Chappaquiddick incident – he waited hours before reporting his accident to police – provided the first of many cracks in the Kennedys’ public image. Instead of running for president, the senator was asking voters in  Massachusetts whether he should resign from the Senate.

“For me, this will be a difficult decision to make. So I ask you tonight, the people of Massachusetts, to think this through with me. In facing this decision I seek your advice and opinion,” he said.
Mr. Kennedy received thousands of telegrams telling him not to quit. He sought the Democratic presidential nomination in 1980 but lost to  incumbent Jimmy Carter.

Other struggles lay ahead.  Three of Mr. Kennedy’s nephews died young and tragically.  Another, William Kennedy Smith, was tried and acquitted on rape charges, with the senator called to testify. He had his own reputation for drinking and affairs but that side of his life seemed to stabilize after his second marriage in 1992.
In 2008, Kennedy was diagnosed with a terminal brain tumor, which kept him from returning to the Senate.  However, last year, he made a surprise appearance at the Democratic national convention to endorse Barak Obama’s bid for the presidency.

Ted Kennedy became one of the longest-serving, most influential senators in modern U.S. history. And in so doing, carried on his brothers’ legacy, and built his own.