In past postings on flood risk from rising sea levels and extreme weather events, I have largely focused on residential and urban exposure to large-scale damage. I’ve also talked about the financial exposure of reinsurers and insurance companies in light of policy coverage in flood-risk zones.

In the executive summary MSCI states, “The devastation caused by Hurricanes Harvey and Irma may re-ignite investor interest in measuring their exposure to physical risks, particularly flooding.”

The study looks at flood hazard zones defined by the Federal Emergency Management Agency (FEMA) and assesses the risk to 13,600 facilities owned by companies represented in MSCI portfolios. This covers Florida, Louisiana, Mississippi, Alabama, Texas, Georgia, and South and North Carolina. Collectively these are the states where 85% of hurricanes have made landfall between 1851 and 2015.

In its key findings, it reports that:

The map below represents the facilities described as most at risk within this study. Note the special flood hazard areas appearing in red.

The source for this map is FEMA which shows all facilities in the coverage area of the study.

The study gives examples of damages to industry and infrastructure from past floods associated with hurricanes such as Sandy in 2012, Matthew in 2016, and Harvey, this past month.

In describing the risk to power plants, given lifespans of 30 to 125 years, and located in 100-year floodplains, it states that likelihood of inundation over 30 years is calculated at 25%.

With the two recent hurricanes, Harvey and Irma, the inadequacy of U.S. flood insurance programs has been exposed. Going back to 1968 when the National Flood Insurance Program (NFIP) was originally established in the absence of private insurers willing to take the risk, this FEMA-based program has been accumulating debt. It is still making payouts for Hurricane Katrina and is $26 billion in the hole. That doesn’t include anticipated payouts for Harvey and Irma.

In an article appearing in The Financial Times on September 1st, it states that “scientists specializing in the modeling of catastrophes were unprepared for what we should really call Flood Harvey” referring to the incredible amount of rain that was dumped on Texas and Louisiana before the storm headed inland.

A weather agency expert is quoted stating “The precipitation was close to the thermodynamic maximum possible level, and not just for one day but for three days.” Why is this comment so significant? Because insurers and reinsurers rely on modeling as well as historical data to calculate risk and the models were no longer valid because Harvey was off the charts. How much? Over 6 days, 132 centimeters (52 inches) of rain fell with most of the damage well beyond areas that FEMA had designated as 100-year floodplain. Harvey showed that FEMA maps were no longer valid.

And as for Irma, the full extent of its impact on power plants and other industrial facilities is still being tallied. NFIP should see its debt hole more than double between the two storms. The Harvey-Irma combination should smash all previous damage assessment records. Munich Re, the world’s largest reinsurer, which at the time of the hurricanes described its catastrophe budget as in good shape, sees the two events as wiping out its short-term profits and impacting its year-end

Munich Re, the world’s largest reinsurer, which at the time of the hurricanes described its catastrophe budget as in good shape, sees these two storms as wiping out its quarterly profits and impacting year-end earning estimates negatively by several billion Euros.

Much of post-Harvey and Irma coverage focuses on residential losses. Certainly, energy companies have deeper pockets and probably better flood insurance coverage than an average homeowner. But nevertheless, the MSCI report points out that 100-year floodplain inundation risk, which today is rated at a 25% probability over 30 years, will more likely, in the future, be exacerbated by climate change and rising sea levels leading to increased frequency of these catastrophic events. And as for 100-year floodplains, the maps that we see such as the one above, need to be redrawn. And I think investors need to have a conversation with money managers about their portfolios with investments in companies that continue to bet against climate and extreme weather occurrences. 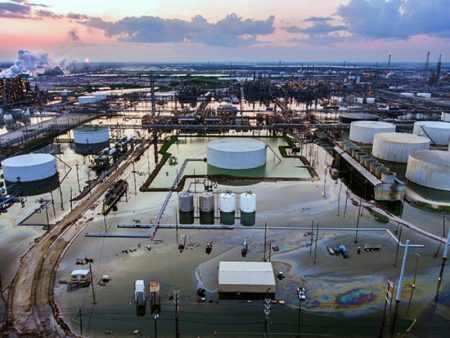 Hurricanes Harvey and Irma created significant flooding in industrial sites. In Port Arthur Texas, the largest oil refinery in the United States was forced to shut down. The total losses to industry from the two storms is still being assessed. Photo credit: Alex Glostrum, Louisiana Bucket Brigade.