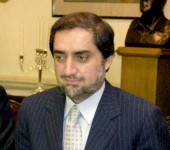 Afghans braved Taliban threats and other problems to cast ballots August 20 in the country’s presidential election. Initial estimates suggested that turnout on August 20 would be lower than in the 2004 presidential vote. On the eve of the election, EurasiaNet caught up with one of the prominent presidential candidates, Abdullah Abdullah, to get his impressions of the campaign and the meaning of the election for Afghanistan.

EurasiaNet: Are you concerned about the possibility of fraud in the presidential election?

Abdullah: Fraud could be carried out in insecure mobile areas, in places where representatives can’t monitor the vote-casting process.

EurasiaNet: Major presidential candidates, including incumbent President Hamid Karzai and yourself, have sought endorsements from warlords, even though these warlords (such as Gen. Abdul Rashid Dostum), have anti-democratic reputations. And in Dostum’s case, his reputation is now tainted by a war-crimes investigation. Why do warlords still play such an important role in the election process?

Abdullah: Dostum hasn’t officially announced whom he supports. The members of the parliament who represent Dostum’s people [the mainly Uzbek population in northern Afghanistan] made some announcements on his behalf, but during his absence [Dostum recently returned from exile — ed.] there has been a leadership struggle within his movement. . . . It seems that he came back to put an end to these fights. . . .

People are excited and they have walked away from the passive anxiety they had. Now they want change and this hope has fueled my campaign. And I don’t find it difficult to convince anyone to join my campaign. My campaign belongs to the people. Karzai needs a big name. I don’t need it. Ismail Khan [a major political player in the western city of Heart] supports Karzai because he doesn’t have a choice. He is a member of his cabinet, and Karzai has probably promised him another ministry in his future government. But Herat is with us. I feel sad for Ismail Khan because he is doing things he doesn’t believe in. He has even damaged his credibility among his people.

EurasiaNet: What about a former colleague of yours who now is a Karzai supporter — former defense minister Mohammad Fahim? Why did he join Karzai’s ticket as a vice presidential candidate?

Abdullah: The people who live in small towns, the people who want a better life and future are my supporters. But Karzai likes to stick to the big guys and big leaders. Good luck to him. Those big leaders may be able to get him some votes, but they can’t influence those people who are asking for real change. Most of our people are tired of their own local leaders and they don’t approve of the deals they are making with Karzai. . . . Fahim told me he likes to be with the winner. He said he supported [Yunus] Qanooni five years ago and he can’t afford to be with another loser.

EurasiaNet: What are your views on the international community’s approach to the election? Have foreign countries, especially the United States, tried to influence the outcome?

Abdullah: I really see that American officials don’t favor any candidate. The United States supports the process of the election, and we appreciate very much that the United States has created space for everyone and has refrained from supporting a particular candidate.

EurasiaNet: Do you think that the election will require a second round of voting?

Abdullah: I hope that it will be done in the first round [he flashes a big smile] and that I will win. Of course it is better for people to know the results sooner. But if the election goes to a second round, my victory is guaranteed almost 100 percent. . . . I have met people in the South who no longer support Karzai, and people of the North who want a fresh start and are frustrated with Karzai’s administration. In Kunduz, a man gave me a small pocket knife. I asked him what that was for and he said; ’when you become the president, take out corruption!’ Corruption is eating our system. . . . Seeing Karzai [win reelection] would put an end to the people’s hopes for peace and prosperity and would frustrate them. . . . No one in our history has had such a golden opportunity [for change] as Karzai has had. But he has failed. Now is the time for a new face to start the construction process.

Editor’s Note: Camelia Entekhabi-Fard has reported from Afghanistan and Iran for EurasiaNet.

Previous post Kyrgyzstan: Us Air Hub at Manas Busier Now Than Before
Next post Uzbekistan: Washington Denies Interest in Returning To Khanabad Airbase