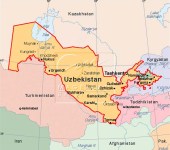 The Islamic Movement of Uzbekistan (IMU) is undergoing a metamorphosis that could transform the Islamic militant group into a far more dynamic foe for Central Asian governments, as well as for the US and NATO troops in Afghanistan.

There has been a surge of IMU-related activity in recent weeks, both in Afghanistan and in former Soviet Central Asian states. On October 19, for example, the Kyrgyz Border Service announced that four armed militants surrendered to Tajik security forces in the enclave of Vorukh, a Tajik entity surrounded by Kyrgyzstan’s Batken Province. A day earlier, Tajik police killed four suspected IMU members in a shootout in Isfara, a Ferghana Valley town situated near the Kyrgyz and Uzbek borders. The dead militants were suspects in the September assassination of the Tajik Interior Ministry’s top criminal investigator in Isfara.

In Afghanistan, local officials say that 15 militants captured by US forces on October 11 in Kunduz Province were affiliated with the IMU. The Afghan Ministry of Defense estimates that there are at least 4,000 IMU-aligned “foreign mercenaries” in northern Afghanistan.

The increase in IMU activity is occurring amid changes in the movement’s composition. According to some reports, the death of the group’s long-time leader, Tahir Yuldashev, has allowed more daring and innovate leaders to assert themselves within the movement. Specifically, an ethnic Tartar named Abdur Rahman is believed to have assumed the helm of the IMU, replacing Yuldashev, who reportedly died from wounds suffered in a US missile attack in August.

Far from crippling the IMU’s operational capabilities, Yuldashev’s passing from the scene seems to have energized the group, experts on the region contend. “It’s hard to imagine [Yuldashev’s death] having much impact on the IMU. Yuldashev’s reputation, as far as we have heard of one, was of an uncharismatic and rather dogmatic person,” said Paul Quinn-Judge, the Central Asia project director for International Crisis Group.

Although Yuldashev’s death has not been definitively confirmed, what is beyond question is the fact that the IMU is now employing bolder tactics. This would suggest at the very least that the old guard has given way to a younger, more aggressive group of commanders.

“I think Yuldashev was quite content operating as an armed wing for the Taliban in Pakistan, working as a supporting group, as opposed to doing what [the IMU] was initially set up to do, which was overthrow the Uzbek government and set up a caliphate in Central Asia,” said Bill Roggio, a expert on the region who edits The Long War Journal, a blog covering the Af-Pak conflict.

“Yuldashev was very conservative about his role in Central Asia. But we’ve seen over the last couple of months that the IMU is stepping up efforts to secure northern Afghanistan and attack Tajikistan. Maybe they [militants] are just waiting for the right moment,” he said.

From the vantage point of Andrei Grozin, director of the Central Asia Department at the CIS Institute in Moscow, conditions in Central Asia are presently ripe for an IMU comeback. “The IMU’s influence could grow because of the worsening social and economic situation in Central Asia,” Grozin said in an interview with EurasiaNet on October 19. “These countries are getting less and less money for aluminium and cotton and for other resources. Consequently, the opportunity for the IMU to influence the population is expanding.”

If reports that Rahman has assumed the leadership of the IMU are accurate, it would signal a significant expansion of the IMU’s base. “If true, this would underline the way IMU has become a trans-national, not just an Uzbek jihadist movement,” Quinn-Judge told EurasiaNet. A trans-national identity could cause a corresponding expansion of its strategic aims. Already, the IMU is reportedly attracting militants from Chechnya and Dagestan, two unsettled regions of Russia, into its ranks, Quinn-Judge added.

A Pakistani government offensive in Waziristan could well stir up more IMU activity in Afghanistan and other Central Asian states. Some estimates say as many as 5,000 IMU fighters have been using Waziristan as a safe haven. It’s very possible that rather than take on the Pakistani military, IMU fighters will opt to return to Central Asia, said Grozin

“If that happens, one of two scenarios will develop,” Grozin continued. “More radical IMU factions might start active operations [in Central Asia], or they might try not to attract attention. The first scenario is more likely because they don’t have rules and the security forces in the Central Asian republics are not very professional, to put it mildly.”