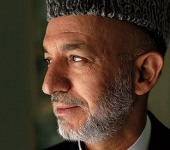 The senior US envoy to Pakistan and Afghanistan has said he believes that a runoff presidential election scheduled for Afghanistan will run more smoothly than its predecessor.

Richard Holbrooke said during a briefing in Washington, the US capital, on Friday that the second round of voting on November 7 between Hamid Karzai, the incumbent, and Abdullah Abdullah would produce fewer issues than the August vote.

“It is reasonable to hope that there will be [fewer] irregularities this time, for several reasons,” he said.

“One – there are only two candidates; two – there is the experience factor,” he said, referring to the Afghan people’s prior experience of casting votes in August.

“Three – the international community, including the forces under General [Stanley] McChrystal’s command are going to go all out to help make this a success. Now, [those forces] did so on August 20, but there are more forces in the country today.”

Holbrooke said that he had respect for Karzai and that he was ready to work with him if the Afghan president is re-elected.

There have been reports that the relationship between Holbrooke and Karzai has come under strain in recent weeks, but the US envoy said his relations with the Afghan president were “fine”.

“They [relations with Karzai] are correct. They are appropriate,” he said.

“I speak to him on behalf of my government and he speaks as president of the country. I respect him and, if he is re-elected as president on November 7, we all look forward to working closely with him.”

Nick Spicer, Al Jazeera’s correspondent in Washington, said: “I think most of the world considered the Afghan elections to have been tainted by fraud – and Holbrooke said there had been a lot of ‘drama’ over the last few weeks.

“But he said that the system in Afghanistan had worked – the Election Complaints Commission caught the fraud, it was corrected, and the Afghan consitution and electoral law had been respected. That was how Holbrooke was trying to put his spin on events.”

Spicer said that Holbrooke’s comments on his links with Karzai would do little to convince those who say that the envoy and the Afghan president do not share a close relationship.

“Holbrooke was almost more eloquent in his silence – he did not say that Karzai was a great guy and that there were really warm and cordial relations,” he said.

“There was no feeling that this veteran diplomat, who is known for his back-slapping and being friendly with all kinds of leaders – including unsavory characters, if that is what was needed to broker a deal – there was none of that today.”

Holbrooke was absent from talks between US and Afghan officials that led to Karzai’s agreement to take part in a runoff vote.

But the US envoy denied allegations that the White House had instructed him to stay out of the negotiations towards a second round of voting.

Karzai’s agreement to take part in a runoff against Abdullah, a former foreign minister, came after a UN-led investigation into the August 20 election invalidated enough of the incumbent’s votes to push him below the 50 per cent threshold needed to win.

Under Afghanistan’s electoral law, the two leading candidates from the first round must contest a second round to determine the outright winner.