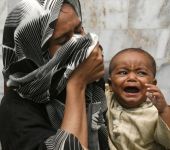 Pakistan’s military has denied that a US drone attack was behind the deaths of as many as 22 people in the country’s tribal areas, insisting that the campaign against the Taliban there is a purely Pakistani offensive.

The confusion over the incident on Saturday came after the military claimed it had captured the hometown of Hakimullah Mehsud, the Pakistani Taliban leader in South Waziristan.

Soon after the military’s announcement about the town of Kotkai, officials were quoted as saying a missile from a suspected US drone attack had hit a house in Chuhatra village in Bajaur.

“The missile hit home of Maulvi Faqir [a local Taliban commander] and we have reports of 10 dead,” Abdul Malik, an official in the region, was quoted by the Reuters news agency as saying.

Other reports said 14 people had been killed. The Associated Press quoted Mohammad Jamil, a government official, as saying the suspected US drone attack had killed as many as 22 people.

The target appeared to be Faqir Mohammad, a prominent Taliban leader, but he is believed to have escaped, Jamil said.

All of those killed were said to be Taliban fighters.

But the military denied the reports and insisted the blast came from explosives being loaded into a car parked close to Faqir’s house.

Alan Fisher, Al Jazeera’s correspondent reporting from Islamabad, said: “What the army is saying is [that] there was no drone attack there – what it was, [they say] was explosives parked in a vehicle near the house and they went off, destroying three houses in the village and killing a number of people.

“The army say they have kicked out all foreign influences and this is an operation being conducted solely by the Pakistani military.”

In a briefing for the media, Qamar Zaman Kaira, the federal information minister, said Islamabad had no agreement with the US on drone strikes.

The Pakistani authorities have always publicly criticised drone attacks inside Pakistani territory, saying that such attacks violate Pakistani sovereignty and help to create sympathy for Taliban fighters and boost their ranks.

The US has shown no sign of easing the drone-fired attacks, but the military has made clear it would prefer the attacks to stop.

“We do not want any assistance or interference from outside,” Major-General Athar Abbas, the Pakistani military spokesman, said.

The military has instead focused on its capture of Kotkai, the hometown of Meshud and Qari Hussain, one of his senior deputies, thought to be responsible for training suicide bombers.

Abbas said troops were now ridding the town of landmines and roadside bombs planted by the Taliban.

“Thank God, this is the army’s very big success,” Abbas said. “The good news is that [communications] intercepts show that there are differences forging among the Taliban ranks. Their aides are deserting them.”

Fisher reported the army was “confident and very bullish with this success one week into the operation”.

“They [the army] say that many of the Taliban are in a state of confusion, they claim that they are cutting their hair and trimming their beards and trying to blend in to the local population.

“The army say they [the Taliban] are being shunned by the local population,” he said.

Ground forces had reportedly been surrounding Kotkai for the past three days as jets and helicopter gunships strafed Taliban positions.

The town’s capture is a symbolic victory for the army, but it is also a strategic one as it lies along the way to the Taliban stronghold of Sararogha.

The military launched its campaign against the Taliban in South Waziristan over a week ago, pitting around 30,000 Pakistani troops against an estimated 10-12,000 Taliban fighters.

The region has become a stronghold for fighters who fled Afghanistan after the US-led invasion toppled the Taliban rulers there in late 2001.

The army’s offensive comes amid a wave of Taliban attacks across the country that have left close to 200 people dead.

It is difficult to confirm the army’s information about its offensive in South Wazitistan as foreign journalists are not allowed near the battle zones and it is dangerous even for Pakistani reporters to visit the area.