After over three decades of living in the United States, one thing that I have learned is never to assume that I understand American domestic politics. Every time I think I grasp where it is going, I am eventually dumbfounded.

So I tread on eggshells when venturing onto that terrain. And given my own lack of predictive powers, I view anyone who claims to have them suspiciously.

Everyone I know says Donald Trump can’t win the presidency. And the pundits on TV still agree, although with decreasing conviction. After all, David Brooks, conservative columnist for The New York Times, was the one who convinced me that Trump could not win the Republican nomination. On that basis I myself predicted he would not be the nominee.

But I have read Philip Roth’s excellent and disturbing novel, The Plot Against America. In this book (a mild spoiler alert from early in the story!), Charles Lindbergh flies into a contested Republican convention, becomes the nominee and wins an election against an ailing FDR. American isolationism follows – as does a new dystopian order.

I therefore refuse to rule out a scenario where a triumphant Trump benefits from a last-minute Hillary Clinton scandal, one that confounds her presidential bid. Stranger things have happened.

What the experts say

Last week I chaired a panel of renowned American experts on the issue of the 2016 election and the future of U.S. foreign policy. These five people are accomplished in both academia and the policy world. Without revealing their identities (only because I didn’t ask them if they could be quoted), I will provide an overview of the opinions they offered about life after President Obama.

Some lauded Obama’s foreign policy accomplishments – like the Iran deal. Others admired his cautious approach, so evidently revealed in Jeffrey Goldberg’s recent piece in the Atlantic Monthly entitled “The Obama Doctrine.” All saw the next few years as broadly resembling the last eight, although they disagreed on how much variation there would be in terms of priorities in a new administration.

As the chair of the panel, I got to ask them the last question. And I seized the moment. I suggested that they all assumed that Trump would not be president. But, I asked, what did they think would happen if he did become president?

The oldest and possibly most distinguished member of the panel offered an honest, simple and now all too familiar response when suggesting he hadn’t a clue.

Other security experts on the panel responded that nobody who was competent and high-profile would be willing to serve on Trump’s foreign policy staff. Indeed, an impressive high-ranking set of Republican foreign policy experts recently signed a letter saying they would not work with him. They consider him unfit for the office of the presidency.

Trump himself says he doesn’t need them, and has named five members of his foreign policy team on Monday.

Several of these individuals have never, apparently, even spoken to Trump. They are led by Jeff Sessions, the head of the Senate Armed Services Committee. Only one, Joseph E. Schmitz, has served in a Republican administration. And he resigned his Defense Department post in 2005 amid accusations that he had been involved in efforts, according to the Los Angeles Times, that “slowed or blocked investigations of senior Bush administration officials, spent taxpayer money on pet projects and accepted gifts that may have violated ethics guidelines.”

Still, if Trump does make it to the White House, there will always be those who will offer their services if they think the rewards are great enough. Look at Chris Christie’s shift from Trump’s critic to his greatest admirer in a matter of weeks.

So let’s follow the advice of one of the speakers on my panel who suggested that we take Trump at his word and assume that he would implement the policies he currently advocates.

Admittedly, that is a bit of a stretch, if only because he is so vague at times. But that is all we have to go with.

So what has he suggested that even vaguely applies to U.S. foreign policy?

First, as one panelist noted, it is a lot harder and more time-consuming to abrogate international security agreements that the U.S. has already signed than it is to institute new economic policies not based on treaties.

So we’d assume that a President Trump would introduce the 45 percent tariff he promised against China more quickly than, say, pull American forces out of Europe. The new tariffs would roil global financial markets. And it’s not just the one percent whom Trump’s supporters despise who would suffer as their assets shrank. So would every other person saving for retirement.

On the other hand, a handful of manufacturing jobs would, presumably, be saved from among the 12 million in the U.S. Manufacturing represents about 11 percent of all jobs, just over half as many as there were in 1979. Even threatening American firms with sanctions if they move offshore isn’t likely to bring enough jobs back to compensate for the huge declines in retirement savings.

Then there is the issue of trying to build a wall along the Mexican border. Of course, at nearly 2,000 miles in length, doing so would probably take longer than two Trump administrations. I doubt whether many of those Americans who support his candidacy would apply for such a backbreaking job. He claims the Mexicans will build it: so using it to create new American employment is out of the question.

And there is the famous issue of who is going to pay for it. But whether the U.S. or Mexico does, the project would help destroy America’s reputation in promoting human rights around the world. It would also ensure that the U.S. would not receive much-needed Mexican cooperation when it comes to fighting the war on drugs – a reputed central issue in Trump’s campaign platform.

But we can’t just stop at China and the Western Hemisphere.

President Trump tells us he would pull American military support for Europe so that the Europeans pay for their own defense. He has no interest in NATO, he says, signaling the end of the western alliance that has been the bedrock of collective defense and stability in Europe for seven decades.

Presumably, his new friends the Russians would be overjoyed at this prospect, given that there would then be no effective military force between Moscow and Paris.

Trump has said essentially the same about thing about Asia, specifically South Korea. So American withdrawal would presumably set off an arms race in Asia as Japan and South Korea arm themselves with nuclear weapons to ward off aggression by China or North Korea.

First, no leader of a Muslim country would dare – even if they still wanted to – talk to us again after all Muslims were banned, however imperative their need.

And while Trump received a civil and polite response at the pro-Israel AIPAC meeting in Washington March 21, it did not match the thunderous reception given to Hillary Clinton or even John Kasich.

Perhaps it was Trump’s prior equivocal comments about being a neutral arbiter between Israel and the Palestinian Authority. Or his earlier suggestion that Israel should pay for its own defense. Perhaps it was his constant reference to Palestine rather than the Palestinian Authority. That was a political misstep, given that calling it Palestine implies it has already achieved statehood. This is something that AIPAC’s supporters don’t want to hear – and it demonstrates to them Trump’s ignorance about the Middle East. Or perhaps it was his reliance on his daughter’s conversion to Judaism to demonstrate that he is a friend of Israel. But a wary AIPAC crowd appeared to offer a subdued response to his assertion that Israel had a “special status” among America’s allies.

Having destroyed America’s economic relationship with China, removed any barriers to Russian bullying of Europe, and reduced America’s engagement in the Middle East, we would have a very different global environment.

Hello Canada and our new dystopia

In a recent episode of “The Daily Show,” Trevor Noah noted that there was a record number of Google hits on the search for the words “move to Canada.” It is a nice idea. But the truth is that nowhere, in my view, would be safe from the effects of a Trump presidency.

So I’m going to hope that members of the panel I chaired were correct to dismiss the idea of a Trump presidency out of hand. Perhaps, as in Roth’s novel, the Republican convention will throw up a surprise – in this case a different candidate.

One thing is for sure: the rest of the world “recoils” at the prospect of Donald Trump in the White House. The question is: do America’s voters care? 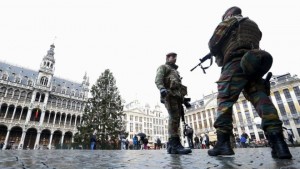