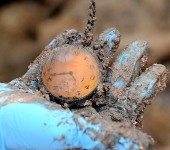 The spokeswoman for chief prosecutor of The Hague tribunal (ICTY), Olga Kavran, spoke to RFE/RL’s Kristin Deasy about the court’s decision four years ago to destroy more than 1,000 personal documents and photographs as well as forensic evidence retrieved from Srebrenica mass graves. These are excerpts of that interview, which was conducted on August 17.
RFE/RL: It seems odd that some of these materials would need to be completely destroyed when they clearly have such sentimental value for the families, who weren’t even informed of the decision at the time. Can you give me more of an understanding as to how this decision came about? And why it was made in secret?

Olga Kavran: First of all, I would not refer to it as something made in secret. The internal working of the office of the prosecutor is not a matter for public discussion. Of course, everything which is related to our cases which is publicly analyzed in court is a matter for public discussion. But there are, of course, as in any court of law, internal practices which are not.

You will find, in any jurisdiction in the world, that there are often artifacts in such situations that are disposed of when they present a risk to health. We are talking about, after all, items that were recovered from mass graves, things that were together with decomposing bodies.

RFE/RL: Can you give me a better sense of what you mean by a health risk?
Kavran: A health risk. You can, I’m sure, understand what a health risk might be from artifacts that were found with decomposing flesh.
RFE/RL: Right. And they could not be stored in any sort of safe condition?

Kavran: I cannot speculate, really, on that point.
RFE/RL: Some victims’ families were expressing frustration that the destruction of the artifacts wasn’t even announced. These were human remains, and personal items, and obviously they could be very significant for the families.
Kavran: Yes, I can’t speculate on that. I think it’s also important to know that since 1996, the Office of the Prosecutor conducted exhumations of 21 grave sites associated with the takeover of Srebrenica, 14 of which were primary — because we also, unfortunately, have secondary and tertiary grave sites as well. And this is up until, concluding, in the year 2000. [It] seems that since then, the Bosnian authorities have exhumed at least 41 mass graves and the exhumations are still ongoing. So there are many, many, many artifacts out there which have been recovered, some of which have never even made it to the ICTY.

RFE/RL: I’m sure you’re absolutely right. It still makes me wonder why the destruction was that necessary. Can you offer any details?
Kavran: No, no, none that I can discuss in this context. But, again, it is not in the least unusual in the practice of courts of law to dispose of artifacts of this nature. Which I’m sure you can verify by discussing it with any local jurisdiction.
RFE/RL: Right after the May announcement that the materials had been destroyed, Haris Silajdzic of the Bosnian presidency released a press statement saying, essentially, that they were calling for an investigation. But it’s not clear to me if those are empty words or if there’s actually something going on in which they are asking for facts and various things of that nature.
Kavran: Well, that would be the correspondence, possibly, between the [Bosnian] government and the office of the prosecutor [at the Hague] which, again, is a matter of…any correspondence is a matter of confidential nature. If that were the issue, I wouldn’t be able to discuss it anyway.
RFE/RL: Is there anything you’d like to add? It’s hard because the facts are so limited and the issue so murky, but if you think there’s anything else…
Kavran: Well, I don’t agree that the issue is “murky.” Or that the facts are limited. I think that — as we have made clear — certain artifacts were destroyed at the end of 2005 and the beginning of 2006, because they came from mass graves and presented a risk to health. I think you have all of these facts. Again, I would disagree that it’s “murky,” because there’s a suggestion — maybe I’m misunderstanding you — but there’s a suggestion somehow that this is something that doesn’t happen. And that it’s something that is unusual. And I’m referring you to domestic jurisdictions just to simply say that, no, it is not unusual that something like this could happen; rather, that a court of law will dispose of certain artifacts.

RFE/RL: Surely I’m not the first to bring up some of these questions. I’m sure you’ve heard from various groups protesting the decision.
Kavran: Yes, most of them based on a misunderstanding of what’s been going on or a misrepresentation of what’s happened.
RFE/RL: And what do you see as their misunderstanding?
Kavran: I said many of the questions come from misunderstandings. You yourself asked about the destruction of evidence. We are not talking about evidence; we’re talking about artifacts. [That] is, for instance, one distinction which comes to mind.
RFE/RL: Is there any sort of public statement that I may have missed that you’ve made to these groups specifically addressing their concerns?
Kavran: Well, the questions have not really been directed at the tribunal. The questions that have been directed to the tribunal, to the office of the prosecutor, have been answered in regular press briefings on our website in similar situations. There have also been many, many, many comments in the media from individuals and groups which have never been directly addressed to the office of the prosecutor, but only made to the media. So such comments have not been answered. All the comments or questions that have been directly addressed to the office of the prosecutor have been answered.