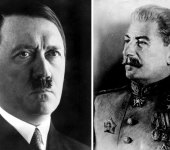 A secret agreement made between Adolf Hitler and Joseph Stalin, which divided Poland between Nazi Germany and the Soviet Union and led to its invasion continues to divide historians, journalists, and political leaders as well.  The Molotov-Ribbentrop Pact, named after the foreign ministers of the two countries, is seen as the preamble to World War II.

The controversy has to do with how the pact was interpreted and to what degree the Soviet Union was implicated in creating conditions that would lead to war.  Discussions about the protocol took center stage in the international media earlier this week as thousands gathered with European and American officials in Gdansk, Poland to commemorate the 70th anniversary of the beginning of World War II.

“I think there is no doubt that the war started with an unprovoked German aggression on September 1, 1939,” says Polish-American historian Piotr Wandycz of Yale University.  Attempts recently made by Russian “pseudo-historians” to blame Poland for refusing to accept Hitler’s demands “completely miss the mark,” he says.

However reasonable they may sound to the Russians, Polish historians would not agree.  “The green light for the outbreak of the war in my mind was the Molotov-Ribbentrop Pact,” says Wandycz.

Wandycz says the problem is that it is extraordinarily hard toseparate one’s nationality from one’s notion of who was responsible for starting World War II.

But that’s not how Russians apportion blame for World War II. “Today, the issue of the beginning of World War II and the role of Stalin and the role of the USSR are seen very differently in the countries of Western and Central Europe than in Russia,” says Russian journalist Masha Lipman.

“The desire in Russia is not to see anything in that war except the victory and there is a reluctance to discuss developments that portray Russia as anything other than a victor,” says Lipman. And in the countries of Central and Eastern Europe, she says, the desire is to concentrate on the victimhood of their nation at the hands of the USSR – respecting both the USSR’s pre-war foreign policy and itspost-war occupation.

“It is very difficult to reconcile the two visions,” Lipman says.  The key point here that is often ignored, she notes, is that – of the 50 million people who died as a result of the war – more than half were citizens of the USSR.

Contemporary Germans fully acknowledge their war guilt. “There’s no relativism in terms of trying to share the burden of who was responsible for World War II,” says Matthias Rueb, Washington correspondent Frankfurter Allgemeine Zeitung. They are eager to make amends, he says.

“Poles see not only Germany as the culprit for beginning World War II but also the Soviet Union, which invaded the eastern part of Poland, approximately two weeks after Germany attacked thewestern part,” Rueb explains.

It is perfectly understandable that Germans would find it easier than Russians do to come to terms with their World War II history, Wandycz says. That’s partly because the Germans, having re-established a state after a long period of division into British, French, and American zones, had to accept their responsibility for the past.

The Russian perspective is colored by more recent history. The disintegration of the Soviet Union in 1991, the dismantling of communism, the economic and political turmoil led to a loss of superpower status. “It had a tremendous effect on Russian morale,” says Wandycz. Prime Minister Putin has called the collapse of the Soviet Union the greatest disaster of the 20th century. From a purely Russian perspective, Wandycz says, that view makes sense. For psychological reasons, he says, it is always important to be able to think well of one’s nation.

Some Russian historians try to justify Stalin’s secret pact with Hitler based on the threat that Nazi Germany posed to the Soviet Union in 1939. “But mainly the revision of Soviet history is for political reasons, not for the discovery of academic truth,” Wandycz says.

The Russian Prime Minister’s acceptance of Poland’s invitation to the ceremonies in Gdansk was an important gesture, says Lipman. “[He] wrote an article in Gazeta Wyborcza (newspaper) in Poland in which he sent a message in conciliatory tones.” In the article, he referred to the 1939 Nazi-Soviet pact to divide Poland as “immoral.” “But I think that even his moderate tone and his conciliatory message would not reconcile many in Poland,” she adds.

However, Rueb remains skeptical of Mr. Putin’s sincerity. He notes German Chancellor Angela Merkel accepted Poland’s invitation to the September 1st commemoration almost immediately, whereas Prime Minister Putin waited for several weeks to make a decision. “I’m not convinced that Putin in his conciliatory note was really speaking for the Russian public or the Russian media,” he says. “I think the Russians still have to go a long way in accepting that they took part – with Germany – in dividing not only Poland but also much of Central and Eastern Europe.”

Rueb also notes that on state television, which is the medium through which most Russians get their news, the Russian leadership has never acknowledged that just before the beginning of World War II, Hitler and Stalin had plans to carve up much of Europe.

There’s No History Without Perspective

The three analysts have genuinely tried to examine the historical record of this critical period in world history by attempting to look at it through others’ eyes.  It is, of course, the task of historians and journalists generally – especially in those conflicted areas where identification with one’s own culture makes that job so difficult.