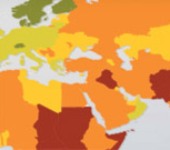 It is a sobering time for the world’s most fragile countries—virulent economic crisis, countless natural disasters, and government collapse. This year, we delve deeper than ever into just what went wrong—and who is to blame.

Yemen may not yet be front-page news, but it’s being watched intently these days in capitals worldwide. A perfect storm of state failure is now brewing there: disappearing oil and water reserves; a mob of migrants, some allegedly with al Qaeda ties, flooding in from Somalia, the failed state next door; and a weak government increasingly unable to keep things running. Many worry Yemen is the next Afghanistan: a global problem wrapped in a failed state.

It’s not just Yemen. The financial crisis was a near-death experience for insurgency-plagued Pakistan, which remains on imf life support. Cameroon has been rocked by economic contagion, which sparked riots, violence, and instability. Other countries dependent on the import and export of commodities—from Nigeria to Equatorial Guinea to Bangladesh—had a similarly rough go of it last year, suffering what economist Homi Kharas calls a “whiplash effect” as prices spiked sharply and then plummeted. All indications are that 2009 will bring little to no reprieve.