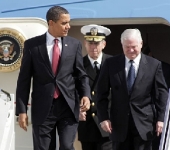 Three pieces I’ve read this week caught my attention: the first on Barack Obama’s response to being asked to describe the ‘Obama Doctrine’ in foreign policy; the second on the rise of progressivism in American domestic politics and the third about the ‘insane’ reaction of the American right to all things Obama.

What struck me here is that whilst the Obama doctrine may differ from the Bush Doctrine in the admission that other countries have interests and potentially worthwhile things to say, that hardly makes it progressive, let alone liberal (and judging by the polling cited in Halpin and Teixeira’s American Prospect article the American public are somewhat confused by the relation of those two terms).  Which makes one wonder, why is the American right so enraged by it?

At very first impressions, the Obama Doctrine has three elements.  First, a revival of American leadership based on American values; second, offering a sense of input into that leadership wherever possible; and third, recognising that American leadership depends upon others’ acquiesence, and that means understanding that other states have legitimate interests.  This represents a repudiation of American doctrine from 2001-2005, which could be summed up as ‘our values are universal and we are the domiant superpower, so we can do what we like and everyone else will fall in line (and if they don’t what do we care)’.

But how significant is this change in tone?  The American right have reacted to it as a sign of Obama’s weakness, reflecting the nationalism that Anatol Lieven analyses in America, Right or Wrong.  It’s weak to engage Cuba and Venezuela, it’s weak to involve China in planning for economic recovery, it’s weak to use international institutions.  And all of this weakness isdangerous because it threatens America’s ability to act in its own interests, and a lack of international freedom of action will soon translate into a loss of individual political liberty at home.

Yet Obama has already wielded unilateral military power in an operation against Somali pirates, something that could easily have resulted, as one commentator noted, in those same right-wingers throwing the Book of Handy Jimmy Carter Epithets at him.  The change in tone that to date is the most salient feature of Obama’s foreign policy reflects a combination of political detente with a measure of American decline, and attempt to use the former to arrest the latter.  It recognises that the sources of challenges to American power are asymmetric, and it is the way in which that power is exercised that determines whether it is met with acquiesence or resistance.  In doing so, Obama hopes to reassert American hegemony through a public good model rather than an imperial model.

Whether the United States can continue to play the role of hegemon, however, depends on more than the willingness of others to accept America as the provider of global public goods.  It also depends on America’s ability to provide them, and on the American public’s willingness to pay for them.  Given the ‘tea bag’ tax protests last week, whether that willingness will remain in bad economic times is unclear.  But what is clear is that the right can’t have it both ways – leadership, whether by means of assertive nationalism or interest-based corporatism, costs.