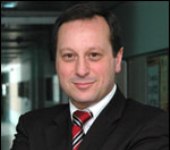 Turkey is not a bridge and I think we should forget using this rhetoric. We should drop this rhetoric from Turkish foreign policy. We are a kind of melting pot, a hub, a political, cultural, strategic hub, whatever you would like to call it. A center where people can meet together, talk together, and where they can interact together.

During the Cold War, Turkey turned its back and ignored the Middle East, said Prof. Mustafa Aydın in an interview with the Hürriyet Daily News & Economic Review, adding that since former Prime Minister Turgut Özal’s administration, Turkey has shown more attention to its surrounding regions.

Aydın’s list of accolades and accomplishments is one of the longest to be found on the Internet. He’s written books and articles, given lectures and served on the boards of prestigious international organizations. At present he is the chairman of the department of international relations at the Union of Turkish Chambers of Commerce and Commodity Exchanges, or TOBB, University in Ankara. He spoke with the Daily News during the second Symposium of the International Centre for Black Sea Studies on Kalymnos in the Dodecanese Islands of Greece.


Aydın said while Turkey’s relationship with the Middle East had grown stronger, it especially gained emphasis when the ruling Justice and Development Party, or AKP, government came to power. “You can find different reasons for that but one of the reasons is the AKP’s ability to play around the Middle East easily. They also have some affinity to Middle Eastern politics and I suppose they have some inroads and connections in the region so that they can tap into them for the benefit of their government and Turkey,” he said.

Aydin also said he has two major views when examining Turkey’s recent Middle Eastern policies. His first view is that Turkey is very active in the region, working to improve its relations with countries such as Syria, Iraq and Palestine. Aydin said Turkey’s activity is a highlight of its foreign policy, especially when examining Turkey from the outside. “It gives Turkey a certain input in the eyes of Western countries, European countries. It shows Turkey’s power, ability to talk to people in different regions and to interact with them.”

While he sees Turkey’s participation in the Middle East as positive in improving relations, his second view is that Turkey has pushed its initiatives too far. “When you are trying to deal with so many different issues at the same time, you lose because Turkey’s capacity has a limit. You cannot deal with all these problems at the same time at a sufficient level. And when you are trying to deal with five or six different projects at the same time, you weaken yourself. You could have focused on one or two initiatives and been successful.”

Aydin said there are many sides to the issue. “Another side of all this is that many of Turkey’s initiatives in the Middle East have been meticulously programmed, designed and put into force. However, somehow, sometimes domestic political considerations influence and intervene in the smooth running of the policies. For example, Turkey has been trying very strongly for years to become a mediator between Syria and Israel to gain their trust so that Turkey can play that role. And finally both sides trusted Turkey to play that role. But suddenly Prime Minister Erdoğan goes to Davos and in one minute he ruined it. Now the Turkish foreign minister is trying to go back to the situation before Davos. It’s not easy. I know the foreign minister is going to visit Israel soon and mend the relationship. They don’t need this. If you have something good, don’t break it. This shows that domestic politics or domestic political aspirations have a bad influence on Turkish policy sometimes, not only in the Middle East but especially in the Middle East.”

Aydın’s looks belie his age and his easy accessibility is far from what one expects of a professor with such a long list of credentials. One of his values is that he is not just open to criticism and different points of view, but he is also very intelligent and capable of analyzing tough problems with a surgical knife.

Turkey a bridge or strategic hub

Asked about the results of Turkey’s emphasizing its great potential as a bridge between the West and Eurasia, Aydın reacted strongly against the use of the word “bridge.”

“I think there are two sides to this. The first one is the rhetoric of being a bridge; I think it does not serve Turkey’s interests. A bridge is something very static, which Turkey is not; it is an ever changing country. Secondly a bridge is something that connects two sides and has no influence on either side; the bridge is something that you pass over. You don’t pay attention to it. However, Turkey is not a bridge and I think we should forget using this rhetoric. We should drop this rhetoric from Turkish foreign policy. We are a kind of melting pot, a hub, a political, cultural, strategic hub, whatever you would like to call it, a center where people can meet together, talk together, and where they can interact together. So the tough side of this is that I oppose the rhetoric of the bridge in Turkish foreign policy.

“The second side is that Turkey has gained a certain level of influence in Eurasian politics. This is again long term. We have to take a long-term perspective. It started in the 1990s. There is a tendency in recent Turkish foreign policy to suppose as if everything started with the AKP government. I don’t share this kind of analysis. Turkish foreign policy is like a straight line. It turns but when it turns it takes time. It turns slowly. Turkish foreign policy actually started to turn in the 1990s, since the end of the Cold War. But here not only recent Turkish politicians but international developments played a role. So again coming back to Eurasia, Turkey’s Eurasia policy also has been changing since 1990-1991. After a period of 20 years, after the end of the 1990s, they started to analyze Eurasia much more rationally, more objectively and more structurally. And based on that, since the second half of the 1990s, Turkey has been focusing on the Caucasus rather than Central Asia and of course in the 2000s on the Black Sea as well as including the Russian Federation.

“So when you look at these regions, in Central Asia Turkey does not have the big influence that Turkey wanted to have in the early 1990s. However, we don’t have many problems with these countries. We have normalized relations there. It’s not something special anymore.

“But when you look at Turkey’s relations with the Caucasus, with Azerbaijan, and not only with Azerbaijan but also to many people’s surprise with Georgia, they are very special.”

Turkey has become the biggest trade partners of both countries, their biggest investors, specifically in energy. Turkish companies are building airports and infrastructure, etc. etc. so there is very close linkage there. And Turkey has certain influence and potential to affect developments in that region. And also having improved relations with Russia gives Turkey a certain ability or maneuverability to affect developments in this area too. Recently this Caucasus operation and platform idea is one such example. I’m not sure whether it’s going to be successful or not. It’s a long-term project. But it’s the only project that you can see on the ground. There’s no other project to develop something remarkable for cooperation within the region.

“The only real puzzle is, of course, how Turkey is going to handle relations with Armenia. If we succeed in approaching Armenia and changing Armenia’s orientation toward the West, then Turkey’s ability to influence developments in the Caucasus will be greatly increased.

“Again you see here the same thing as in the Middle East, you meticulously plan, program and put into effect a policy line, a structured project that suddenly domestic politics influences and you do something or you destroy everything or you stop everything at least for some time for the foreseeable future.”

From where does Aydın think the greatest threats to Turkey will come in the future? He admits he doesn’t know because they are everywhere.

“I think the greatest threat É I will define threat not in a very conventional way, in a very unconventional way. And I think that the greatest threat to Turkey in the future is to be left out of the European Union. Or more correctly, out of the European family of states. If Turkey is not part of Europe, part of the West, it will be a country in limbo and a country drifting away, not necessarily from the West but drifting around. Then we will look at different alternatives and we’ll not be able to make up our minds between alternatives. It won’t be the first time that domestic politics have influenced foreign policy. That kind of Turkey becomes introverted, inward looking, xenophobic, ultra-nationalist and everything that affects Turkey’s economic stability. So that I think is the biggest threat, not necessarily to be a member of the EU but to be part of the European state of families, within the same mentality and the same world outlook.”