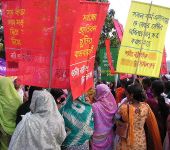 Clear-cut gender roles as depicted in the early “Indian Captivity Narratives,” a genre that represented “arguably the first American literary form dominated by women’s experiences as captives, story-tellers, writers, and readers,” could be seen as literary precursors to Richard White’s “Middle Ground” theory. Although White is not primarily concerned with the role of women on North American frontiers, his philosophy affords Native Americans – a group traditionally perceived as comparably disenfranchised – as playing a far more active role in their economic, environmental and social dealings with European settlers than historians had usually permitted before the 1970s. Although evidence of the Middle Ground is less apparent in the more confrontational “frontiersman” accounts of the nineteenth century, the formative captivity narratives penned by female authors – the “prototype of popular American writing, dominating publication during the last years of the seventeenth century and serving as essential source for much later American fiction” contain elements that serve as definite antecedents of White’s model.

The premise of many seventeenth- and eighteenth-century captivity narratives echoes White’s central thesis of extensive interracial dialogue and exchange on American frontiers. The basic form of the Indian Captivity Narrative remains relatively constant, retaining “as its central premise the disruption of … identity; through a violent separation from family, friends, and community, captives must come to terms with their identity in opposition to the Native community that has taken them.” Although such texts are disparate in theme and content, a recurring principle within many of them is that of the confined woman learning to endure hardship and develop practical skills, which exist outside the realm of traditional women’s roles in American society, where “the functional opportunities open to women were usually too limited to allow them to make the transition in attitudes necessary to insure high status performance in the newly emerging nation.”