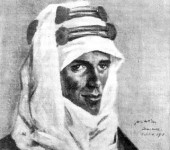 It has come full circle. It’s easy to assume that the Counterinsurgency Field Manual — the U.S. military’s new, post-Iraq-surge bible on unconventional warfare — is something of a revolution in military thought. Afghanistan itself is rewriting the rules of war every day, it seems. But history has a funny way of repeating itself. The U.S. generals dictating strategy to their troops would have done better to pass around a 1917 publication by Lawrence of Arabia, “27 Articles.”

Like the Counterinsurgency Field Manual, which was written at a time when the U.S. military was losing Iraq, “27 Articles” was composed during difficult days. It was the height of the Great War in August 1917, following the astonishing capture of Aqaba in the desert campaign against the Ottoman Empire. The British were using Arab insurgents to harass the Turks, and the high command in London, fearing that Aqaba’s conqueror, Lawrence of Arabia, could be killed at any moment, tasked him with codifying what he had learned in dealing with his Arab allies. It was meant to be a manual for British officers serving in the field with Faisal, the Hashemite prince and insurgent leader, and his troops.