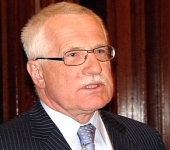 After two years of debate, referendums, furious revision, and campaigning, the fate of the Lisbon Treaty to reform the European Union has come down to the signature of one man. Unfortunately for advocates of European integration, that man is Czech President Vaclav Klaus.

In his latest bid to scuttle the treaty’s adoption, Klaus is insisting that a new, basically meaningless footnote be added, a demand that the the Czech government, which previously endorsed the treaty, is grudgingly supporting, despite the fact the treaty had been approved by the Czech Parliament. If he can delay matters long enough until an anti-Lisbon Conservative government comes to power in Britain, Klaus now has a small but not insignificant chance to sink the treaty altogether, a fitting swan song for the lifelong Euroskeptic.